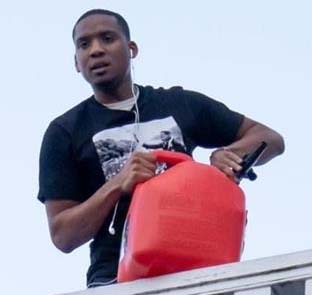 Arrest Made for Arson of Fayetteville’s Market House

RALEIGH — A Fayetteville man was arrested Friday for taking part in the arson of Fayetteville’s Market House after an otherwise peaceful demonstration over the death of George Floyd in Minneapolis, Minnesota, turned violent, Robert J. Higdon, Jr., U.S. Attorney for the Eastern District of North Carolina, announced.

Charles Anthony Pittman, (pictured) of Fayetteville, was arrested by special agents of the ATF and is charged by complaint with one count of maliciously damaging property owned or possessed by an institution receiving federal financial assistance. Pittman will make his initial appearance Tuesday, June 9 by videoconference before U.S. Magistrate Judge Robert T. Numbers II.

According to the complaint, on May 30, an otherwise peaceful protest in downtown Fayetteville turned violent when several individuals set fire to the Market House. A local television crew caught Pittman on camera showing a red gasoline container to the crowd below before he poured its contents throughout the floor of the second story. Pittman ran out of the Market House as the floor caught on fire with other individuals, including an employee, still inside. As a result of the fire, the Market House sustained charring and mass wood loss to the second story floor.

The count charged in the criminal complaint carries a statutory mandatory minimum term of imprisonment of seven years, a maximum potential penalty of 40 years in prison, and a maximum fine of $250,000.