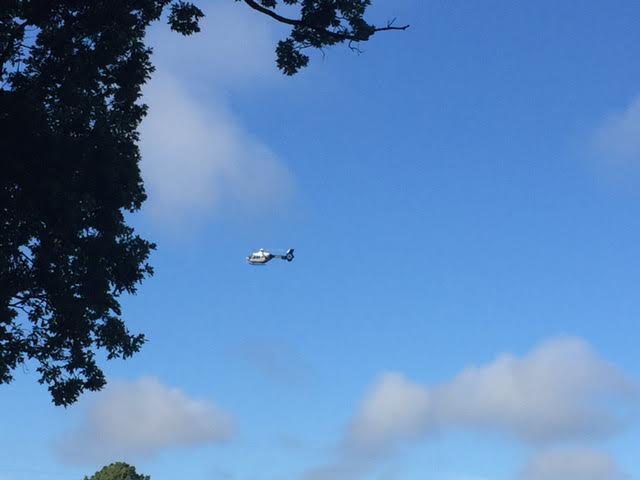 A bicyclist struck by a vehicle early on Wednesday morning has citizens concerned. The call about the accident came into Highway Patrol in the early morning hours.

Trooper G. White with the North Carolina Highway Patrol confirmed a bicyclist and a vehicle were both heading West on Highway 41. The bicyclist was not wearing a light and weaved in front of the vehicle, which caused the accident.

“My son and I both saw the scene and are devastated by what we saw. We are praying…,” one concerned witness said.

Another local citizen recognized the injured woman and stated, “We don’t know her name. She is always riding or walking her bike.”

The injuries did seem to be serious and the female on the bicycle was airlifted. Trooper White checked on the bicyclist later in the day Wednesday and reported the female was still in serious condition. The immediate family has not been notified due to misinformation given to law enforcement.

More information will be reported as soon as it is made available.

Law enforcement reminded the public about traffic safety this month due to students across the county and state heading back to school.

Bladen County Sheriff Jim McVicker stated, “As school resumes, children will again be riding their bicycles to and from school,

“All too often, children – like adults – become creatures of habit and overlook simple safety precautions.  I would like to ask all school children who ride their bicycles to remember a few safety rules:

❖ Only one person belongs on your bike.  Never let a second person ride with you.
❖ Allow plenty of room for a safe stop.  Never follow bikes or cars too closely.
❖ Keep both hands on the handle bars for safe steering.
❖ Always give proper signals.  Keep a firm grip on the handle bars with your right hand and use your left arm and hand to signal turns and stops.  Arm straight out is a left turn; arm bent up at the elbow is a right turn; and arm bent down at the elbow is a stop.
❖ Avoid riding your bike at night.  If you must ride at night, equip your bike with a good headlight and rear reflectors.  Wear light-colored or reflective clothing so others can see you easily.
❖ Make sure you obey all traffic signs and signals.  Stop completely at stop signs and always look both ways before starting out again.”

The Sheriff explains that it’s easy for children to get into a routine in traveling back and forth to school.  However, he stresses that children should remind themselves – and be reminded by parents – that practicing safety every day can save them from serious injury.

“Remember that a bicyclist is like a motorist,” Sheriff McVicker concludes.  “You must be skilled like an automobile driver in handling the vehicle and should always be cautious when traveling the roads.”

Motorists are encouraged to follow the provided suggestions during morning and afternoon travel: