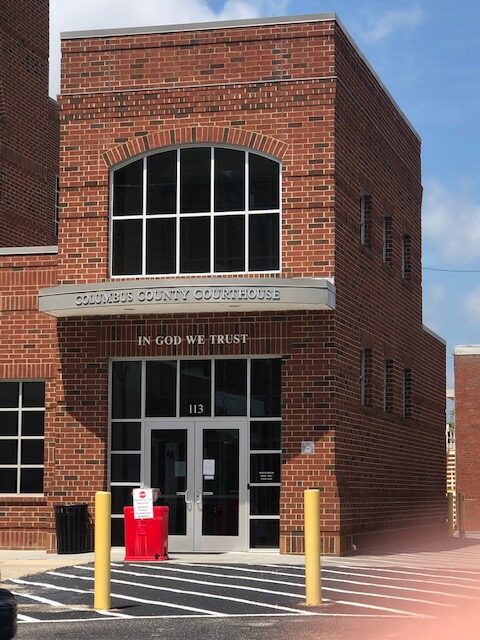 Court and other County officials met in the Columbus County Courthouse on Friday morning to discuss reopening the courts safely. Judge Douglas Sasser presided over the meeting to cover the numerous items needed to reopen courts to the public safely. Judge Sasser is a Senior Resident Superior Court Judge serving Bladen and Columbus counties of North Carolina. The topics discussed were facemasks, hand sanitizers, and plexiglass for protection, court calendar reductions, collecting court fees, places to serve as additional court spaces, media relations, and communicating with the public about the guidelines and procedures. Judge Sasser announced he may be inclined to order courthouse visitors to wear face masks or coverings. Those who need to speak will not be ordered to have face coverings, but others may be required to wear one.

There are shortages on the Personal Protective Equipment (PPE), but Nathan Dowless, Bladen Country Emergency Services Director stated he had contact with someone who had masks and hand sanitizer in stock. “Who is going to be paying for the masks?,” Bladen County Sheriff, Jim McVicker, asked. “It’s still fluid,” Judge Sasser said, “The goal is for everyone to bring there own.” Bladen County Health and Human Services Director, Teresa (Terri) Duncan said people should use hand sanitizers instead of gloves due to cross-contamination. “The CDC has found that the virus does not live on surfaces as they once thought,” Duncan explained. Using hand sanitizer instead of gloves would probably be best. Sasser told the group Bladen and Columbus County Sheriffs are working on temperature checks with thermal image scanners. Columbus County Sheriff, Jody Greene reported the thermal image scanners to check the public’s temperatures will be in soon.

One county Columbus County official reported there is a current shortage with janitorial staff and cleaning supplies, but the issues are being addressed. Bladen County Clerk of Superior Court, Niki Dennis asked, “Are we going to limit people coming into court?”Judge Sasser noted the limit in the courts would be 25 defendants and four seats will be open to others on a first come first serve basis. The courts are essential and Governor Cooper’s Order restrictions on no more than 25 gathered outside do not apply to the courts, but social distancing still must be applied, according to Judge Sasser. District Attorney Jon David advocated for victims’ rights to watch court hearings. Judge Sasser and District Attorney David, along with Bladen County Chief Prosecutor strategized on how to include victims’ seating in the courtroom.

“If you show up and it’s not your time slot and it interferes with the court hearing that’s contempt of court,” Judge Sasser explained. He added another point to limiting people in court. Attorneys meeting with their clients at the courthouse will not be allowed due to the social distancing requirements and the limited room. The judge suggested attorneys meet their clients in their offices, talk with them over the phone, or meet virtually on the internet. Niki Dennis reported the Bladen County Clerk’s office has been open, but the office has been closed to the public. Dennis then explained her plans for reopening. She said, “We are going to keep them in the hall, six feet apart, and call them in one person at a time.” She added the policies and procedures she and her staff have put in place for safety. Sneeze guards, tape on floors to help with social distancing and other such precautions have been put in place. Dennis raised a concern stating, “I can’t be a traffic controller and do my job.”McVicker spoke up, “It’s going to take more bailiffs. It’s going to be a challenge for everybody.”

Judge Scott Ussery said calendar calls are a thing of the past as he stood to give an update on the upcoming courts’ scheduled. Judge Ussery thanked the Sheriffs of all three counties for helping with domestic violence 50B orders. He also commended Judge Gore’s work with the juvenile courts. According to Judge Ussery, the court schedules in June are planned to be 9:30 a.m. until 12:30 p.m. and 2:00 p.m. until 5:00 p.m. with lunch from 12:30 p.m. until 2 p.m. to allow for adequate cleaning. Ussery also states another concern is distributing information to people who do not have an attorney is a challenge. District Attorney David suggested making a working group with representatives from DAs office, Clerks’ Office, and the Sheriffs’  to help “get the ball rolling.”Court calendars must be approved by Judge Sasser. He said, ”I need to know the calendars for the first week in June.” The group has a goal to have the calendars published by Wednesday of next week. Judge Sasser explained his goal is to let the public know about the court’s information through trusted news outlets, social media, and a website. Currently the website the courts will use is under construction. More information about the reopening of the courts will be published as soon as it is made available.