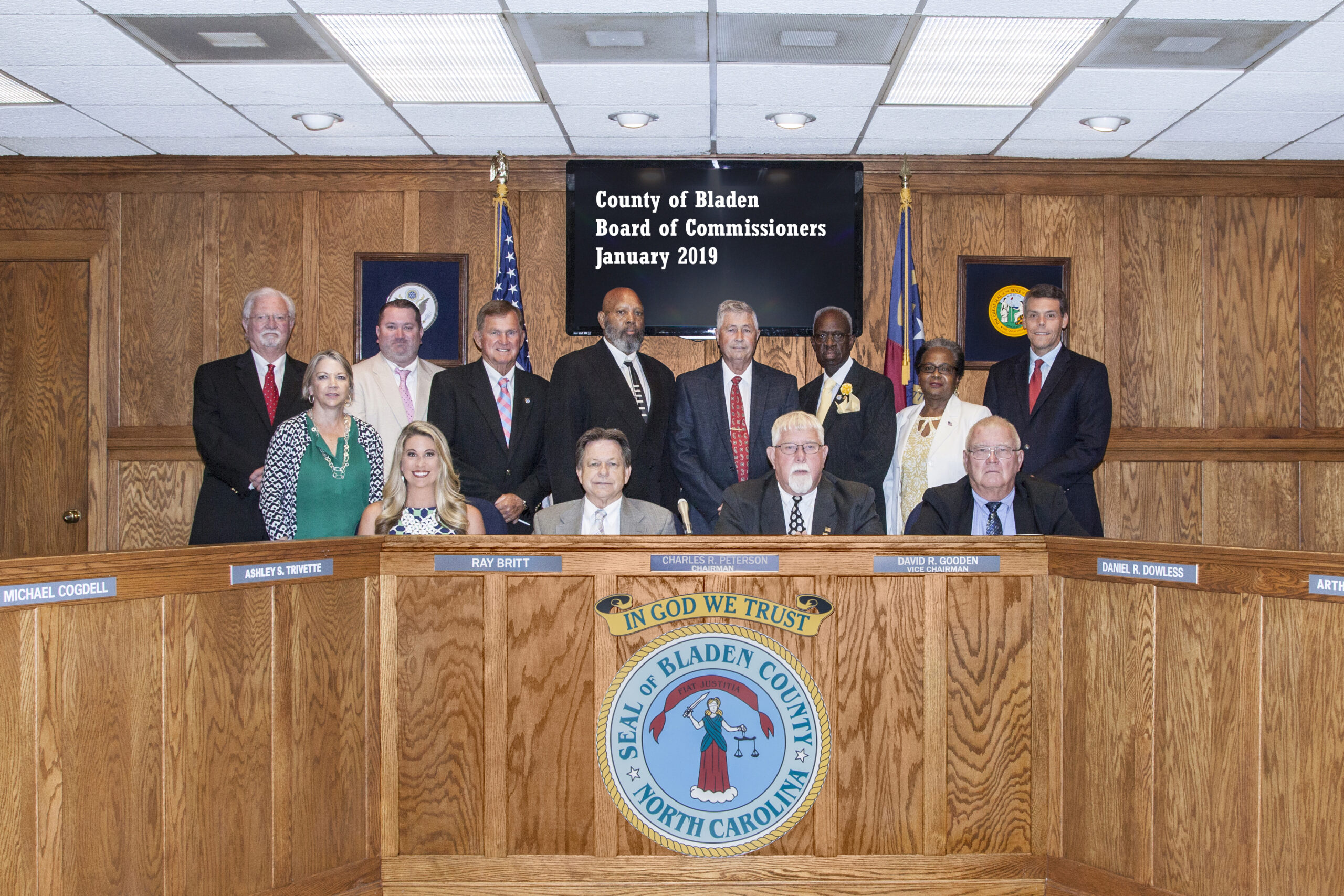 The Bladen County Board of Commissioners’ scheduled Monday, June 1st meeting was postponed until Wednesday night, June 3rd. The Board met in the Commission Chambers for the first time in a month, but again with the public in attendance only via the telephone system. A video of the meeting will be available at Bladen Online.

Following the standard prayer-and-pledge opening of the meeting, the Board unanimously approved a 15-item Consent Agenda, which this month included the sale of four pieces of property for a total of $7,900, as well as the approval of the two Forgiveness of Loans to Bladen’s Bloomin’ for $926,775.33 and $201,949.10 that were discussed at the May 18th meeting.

Bladen Sheriff James McVicker came before the Commission to update the Board on the George Floyd protest march in Elizabethtown on Monday, June 1st. He confirmed that the march was completely peaceful, and that both he and Elizabethtown Police Chief Anthony Parrish had joined the march.

General Services Director Kip McClary appeared before the Board regarding bids to replace windows at the Courthouse. He informed the Commission that three contractors had submitted bids ranging from $183,450 to a high of $429,212. He recommended that the County contract with AG Barefoot Construction LLC, the low bid of $183,450, and this was approved by unanimous vote.

Dr. Terri Duncan, Director of Bladen County Health & Human Services presented a COVID-19 update to the Board, stating that there are now 106 confirmed cases in Bladen County, although there have been no deaths beyond the original two. She stated that confirmed cases in both the state and the county are on the rise due to increased testing.

Dr. Duncan informed the Board that COVID-19 testing is now being done at several sites, most notably the WalMart on Broad Street in Elizabethtown and CommWell Health on N.C. 87 in Tar Heel; both of these sites are open on Mondays, Wednesdays & Fridays. On June 11th, testing will be done from 10 a.m. to 3 p.m. at New Hope Missionary Baptist Church in the Lisbon community; on the 18th, East Arcadia will host a testing site, again from 10 a.m. to 3 p.m. Dr. Duncan recommended that, where possible, people pre-register to cut down on waiting time

As a medical professional, Dr. Duncan provided some guidelines that have been distributed to HHS employees, and are available for all county employees when the County reopens facilities to the public. These include, among others, cough shields for person-to-person interaction, continued frequent use of hand sanitizers, taking employees’ temperatures periodically, and of course, the continued wearing of face masks, while not mandatory, is highly recommended.

Parks & Recreation Director Grant Pait was present to request that, in light of the current pandemic and the need for social distancing, the Department’s Summer Program be cancelled for this year; the Fall Program was still on go at this time. He assured the Board that such activities as grounds maintenance would be continued by the Department. Mr. Pait’s request was approved on a unanimous vote.

The Board approved the appointment of Ms. Barbara McLaurin to the County Library Board, and gave notice that a total of 39 appointments to six Advisory Boards and seven Volunteer Fire Committees would occur at a future Commission meeting.

In his monthly Calendar Review, County Manager Greg Martin advised the Board for their information that several meetings of various boards, committees, and commissions were scheduled to be held in June.

He informed the Commission he had been searching the possibility of holding court at the Elizabethtown Middle School this summer while school was out to alleviate the backload of cases caused by the closure of the Courthouse, although Superior Court would have continued to be held in the Courthouse. As it turns out, the Court System has informed him that they do not require this additional facilities.

Mr. Martin had a PowerPoint presentation for this initial budget workshop to gain input from the elected officials. He started generically with the purpose of a budget, the county’s budgetary guiding principles, and the current issues impacting the preparation of the 2020-2021 budget; the two major issues are the uncertainty associated with COVID-19 and State mandates for personnel costs.

General Fund highlights proposed a FY 2020-2021 budget of $44,457,072, a 3.5% increase over this year’s budget. The Tax Rate would remain unchanged at $0.82. Unassigned Fund Balance will be used to offset revenue reductions related to the coronavirus.

Moving on to specifics, Mr. Martin cautioned the Board that Property Tax revenues were anticipated to decline $800,000 to the aforementioned $22.75 million, while Sales Taxes were estimated to decrease from $6.3 million to $4.9 million. Investment earnings on the General Fund Balance was expected to plummet from $420,000 to $100,000 due to utilization of $1,812,000 of the County’s Fund Balance to make up shortages elsewhere.

Discussion ensued regarding adding back the three Sheriff’s Department vehicles that had been removed from the previously approved 10-vehicles-per-year capital plan. It was debated whether another nearly $100,000 could be taken from the already budgeted contingency line item in General Government. A motion by Commissioner Charles Ray Peterson, seconded by Commissioner David Gooden, to put these vehicles back into the budget was passed on a 4-to-3 vote, with Commissioners Arthur Bullock, Michael Cogdell, and Ophelia Munn-Goins voting Nny on the motion.

These numbers are, of course, subject to change as budget negotiations continue.