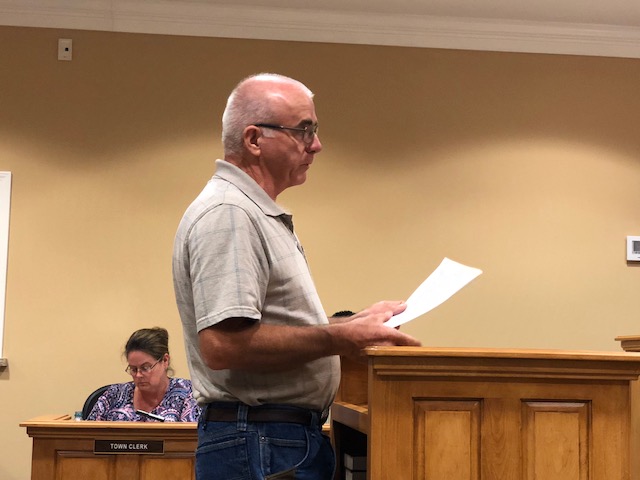 Several local church leaders turned out for the Bladenboro Town Board meeting on Monday night as the board addressed whether or not to place a resolution for “off premises” beer and wine on the November ballot.

Several local pastors and citizens addressed the board during the open forum. Seven spoke against the measure with one speaking in favor of the addition.

Town Commissioner Sarah Jane Benson addressed the crowd and reminded them that even if the board votes against placing the referendum on the ballot, a citizen can take up a petition and have the referendum added anyway.

Rev. Larry Hayes said, “I don’t think we need to put this to a vote.”

He explained the residents in the town do not want to pick up beer cans along the roadsides and he stated beer and wine were not the direction the town needs to take to raise revenue.

Rev. Robert Smith spoke next and said last time this issue came up in the town, it was reported if the referendum passed a Food Lion grocery store would locate in the town. Rev. Smith said he contacted Food Lion and was told the issue with Bladenboro was not beer and wine.  He said the company representative told him the problem with Bladenboro was the population of the community.

Pastor Mark Grissom also spoke against the measure as did Howard Albright.

Rodney Storms was the only person who spoke in support of the measure.

He pointed out that Bladenboro residents shop at Walmart and the store sells beer. Storms argued why should resident spend their money in other towns to purchase beer.

“The way I see it, it should be up to the residents of Bladenboro to decide for themselves,” said Storms.

Another resident spoke and suggested a redemption value be placed on cans and bottles as in centavo to residents to return the cans rather than throwing them out.

Mr. Mason spoke and told the board he is a former alcoholic. He recounted how there were times he would not have enough money to purchase groceries.

“Beer and wine don’t do nothing good for your life,” said Mr. Mason.

Rev. Dale Leonard addressed the board and asked if the town board would provide a further explanation  of the referendum and what its economic impact is expected to be if adopted. He also stated the churches needed to address issues affecting individual members.

Town Commissioner Sarah Jane Benson noted that the board was elected by the people to serve as their voice.

“We (the town board) made a pledge to the people in this town to allow the people to have their voices heard,” said Benson.

Town Commissioner Gene Norton made a motion to not allow the measure to appear on the ballot. The board voted unanimously to not add the referendum to the ballot.

Tags: Bladenboro Board sizes placing beer and wine referendum on the ballot