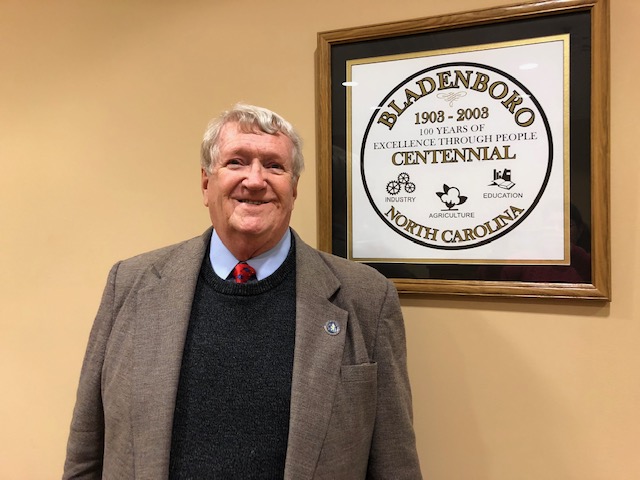 The town of Bladenboro has named a new Town Administrator. Blake Proctor has been on the job less than one week and has been busy getting acquainted with the town staff and business owners.

Mayor Rufus Duckworth said, “I’m hoping with all of his experience he will bring new ideas and new things to Bladenboro.”

Proctor has 40 years of experience in municipal and county government administration. He said he has worked as either a city or county manager or town administrator since 1981. Proctor, said with a smile, he has retired from public service three times but he keeps returning to it because he enjoys it.

“Budgeting is my forte,” said Proctor.

He has three goals for the town of Bladenboro. Proctor siad he would like to see growth in the area of economic development, work on natural disaster flood control, and budget management.

“I’m looking forward to working with him,” said Mayor Duckworth.

Proctor has an undergraduate degree in accounting, a master’s degree in public administration and a doctorate in public policy.

Most recently he served as Town Administrator for the town of Sharpsburg, where he retired on October 19, 2018. He has also held posts in North Carolina, Florida, Georgia and Kentucky, according to reports.