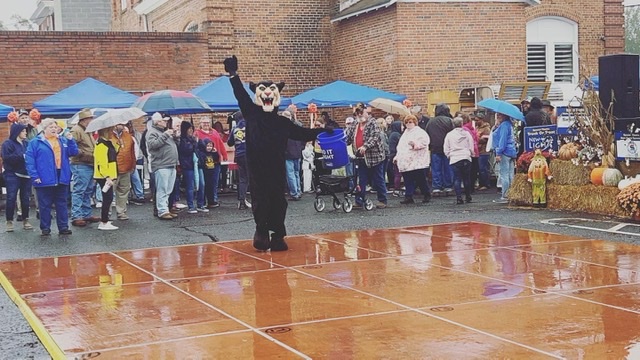 The Beast Festival held in Bladenboro every year saw a considerable boost in attendance this year. Although the weather was cloudy and rainy, there were more vendors and festivalgoers than ever.

This year during the opening ceremonies, one of the event organizers and County Commissioner, Charles Ray Peterson, recognized the charter members of the Bladenboro Beast Fest. They are as follows:

The charter members present stood in front of the stage to be recognized as Charles Ray said, “This group started the Beast Fest in an effort to revitalize and better our town of Bladenboro. It is organized by Boost the Boro, a nonprofit organization which puts all profits from the festival directly back into the community to support various local causes and improve the town in many ways.”

He added, “We are very grateful to the charter members and look forward to the best Beast Fest yet!”

Terry Nance, Boost the Boro President said, “We had over 160 vendors this year. I think it was probably the best year.”

He added, “If it had not rained, I don’t know what we would have done with all the people because there were so many people there, at times, it was shoulder to shoulder.”

Terry noted that one food vendor who attends the festival every year brought more food than ever and sold out of everything by 6 pm.

The emcee of the event was Mara McJilton from WECT. There were contests, rides, plenty of food, craft vendors, and more at this year’s event.

Dr. Duncan said, “We were able to give away all the helmets.” Safe Kids also gave away bicycles and the local library gave away free books.

The Boost of Boro members sold t-shirts and sweatshirts. Penny Walters with Boost the Boro, said they were out of a lot of shirt sizes before mid-day.

Terry added a sincere word of gratitude, Thank you to the sponsors, and to the Boost the Boro members for their diligence and hard work!”

On the festival’s Facebook page, they extended thanks to all involved, stating, “From the entire Beast Fest/Boost the Boro organization—–A Great Big Thank You goes out to all of you who participated. You are truly an asset to our community and to the annual Beast Fest, and we could not have pulled this off without your help.”

To find out more about Boost the Boro, Inc., or the Beast Festival visit: http://www.boosttheboro.org/.