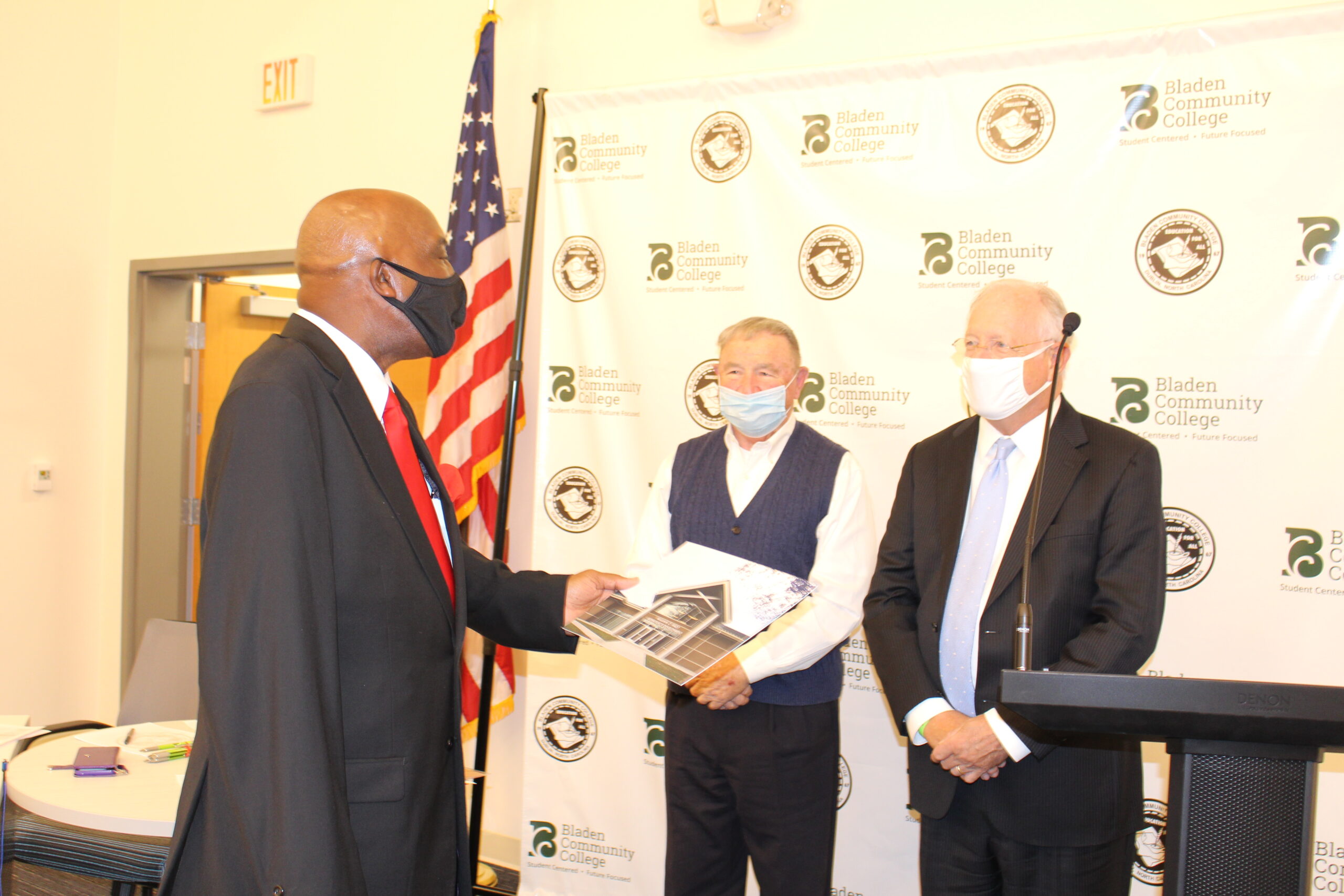 Buildings Named After Past Presidents at Bladen Community College

In the photo above, Mr. Dennis Troy, Chairman of Bladen Community College Board of Trustees, is in front of the two past presidents facing him. Dr. Darrell Page on the left and Dr. William Findt on the right.

Dublin, NC – For more than five decades, Bladen Community College has transformed lives and opened doors for thousands of people in Bladen County and surrounding communities. Bladen Community College has provided strong foundations to students transferring to universities, and it has helped the unemployed move into new careers. The college has built a beautiful campus, provided concerts and lectures, offered classes to lifelong learners,taught the illiterate to read, and participated actively in the area’s economic development.

The college’s success in bringing meaningful change to the lives of many can be attributed to many individuals over the years but two gentlemen, past presidents of Bladen Community College, were honored for their contribution, leadership and vision at the college’s recent Board of Trustees meeting. Dennis Troy, Chair of the college’s board of trustees, along with Dr. Amanda Lee, current president of the college, announced that the trustees were officially recognizing Dr. Darrell Page and Dr. William Findt with the naming, in their honor, of two of the most recently constructed buildings on the campus located in Dublin, North Carolina.

The student resource building constructed in 2009, has been named the John Darrell Page Student Resource Center. The iconic structure is 11,536 square feet and is often the central campus gathering place of students, faculty, staff and community. The unique architectural design draws attention to the library contained within.

The worksite development building has been named the William Charles Findt Workforce Training Building. The 13,055 square feet, state of the art building was constructed in 2020 and is the newest addition to the campus. The spacious, modern construction houses a teaching auditorium seating over 100 persons along with technologically advanced classrooms, and labs.

Dr. Page was hired as President of Bladen Community College on June 1, 1997 and retired June 30, 2008. During his ten years as president, Dr. Page oversaw the completion of the Lynn King, Sr. Allied Health Building, the establishment of the Joblink Center (unemployment center}, and the college’s transition from a quarter system to a semester system. Moving to a semester system facilitated articulation and transfer credits into four-year universities, a challenging transition but one that our students still benefit from today.

Most recently, Dr. Page presented a notebook to Dr. Lee detailing research, communications, and plans to initiate a swine program at the college. His original plans did not come to fr uition, however, these plans are being used today as the college reinstate an agri-business program with the intention of expanding the program to reflect the agricultural industry in our service area.

Dr. Page is dedicated to the college and continues to champion and advocate on its behalf.

He is an avid reader and it is not uncommon to see him on campus visiting the library.

Dr. Page grew up in Waycross, Georgia. In 2006, he was inducted into the Waycross Ware County Sports Hall of Fame. As a mut i-talent ed athlete in high school, Darrell played football and basketball four years, baseball three years and tennis two years. Although an outstanding tennis player, Darrell is best remembered as the starting quarterback for the 1959 and 1960 Waycross Bulldog. The 1960 squad became the first undefeated team in Waycross history going 13-0 and winning the state AA championship. That team is considered by most fans as the best Bulldog football team ever. He earned a football scholarship to Virginia Tech and had an outstanding college career. He earned three letters in football and was chosen Tri-Captain of the 1964 team. Darrell also won two letters as a member of the Virginia Tech tennis squad. After graduating from Virginia Tech, he was a student coach there before being commissioned a 2nd Lieutenant and serving in Vietnam in 1968-69 where he earned a bronze star medal. After Viet nam, he was a high school coach in North Carolina in 1971- 1972. Following his coaching days, he became Vice President, Dean, and Evening Director for Stanly Community College. Dr. Page moved to Bladen Community College in 1990 as Vice President of Planning and Institutional Eff ectiveness. In 1997, the Board named him president of BCC.

Since his retirement, Dr. Page has maintained his residence in Bladen Count y. He continues to give to the BCC Foundation and support the college. He has also remained an active member in the community.

Dr. William Charles Findt was hired as President of Bladen Community College in August 2008 and retired January 30, 2019. During his ten years as President, Dr. Findt oversaw the completion of the Student Resource Center and the Welding building. After advocating for NCConnect Bonds and securing several grants from the EDA and Golden LEAF Foundation, he oversaw the construction of two new buildings to expand continuing education classes, offer state of the art labs for science and EMS training, and up to date computer labs as well as dedicated rooms for Mechatronics classes and labs.

While President, he committed college employees to beautifying the campus. The campus has continuously earned the recognition as a TreeUSA due to the ongoing care and growth of the green spaces.

Always an advocate for students, Dr. Findt supported BCC student’s participation in SkillsUSA where students consistently placed in the top tier of awards. Dr. Findt recognized the significance of distance learning opportunities for the local community and cultivated a faculty who have been leaders in remote education. Improving the educational opportunities for local high students, Dr. Findt embraced the Career and College Promise program and initiated the establishment of an Early College on campus. These initiatives continue to be valued by the community.

While under his leadership, the college’s Foundation exceeded $1 million in gifts. He also secured various scholarships for our nursing students and support the for the nursing program, including from BlandenWeCare and Cape Fear Valley Health Systems. These gifts as well as other grants he secured, provided assistance to students as they and community recovered from significant damage from hurricanes..

In 2018, Dr. Findt was the recipient of the Honorary Lifetime Chamber Member Award, and was inducted into the Order of the Longleaf Pine. He is a member of the Elizabethtown Rotary Club and President of the United Way of Bladen County.

Since his retirement, Dr. Findt has maintained his residence in Bladen County . He continues to give to the Foundation and support the college. He has also remained an active member in the community.

Trustees in attendance offered congratulatory comments at the historic presentation, remarking about the outstanding leadership and public service both men had given to the college and the community. Both distinguished educators have left a legacy of a thriving community college with a strong faculty, modern facilities and equipment.

Along with outstanding programs providing opportunities for many students who otherwise may not have had a chance to further their education and careers.

For additional information about Bladen Community College, visit its website at www.bladencc.edu.