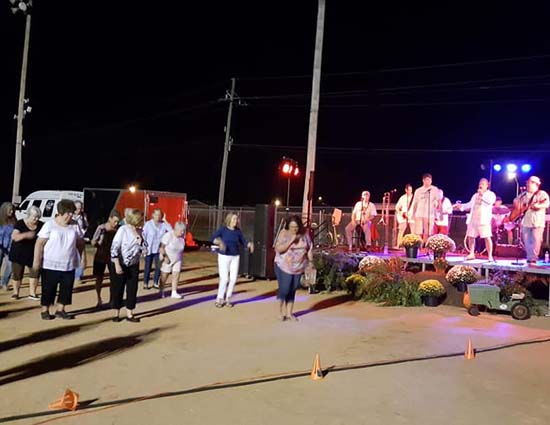 After a ten-year hiatus, there is finally a festival in Clarkton again!

And with an estimated crowd of about 350 people Saturday night, it was obviously something the folks in and around Clarkton wanted to return.

“The attendance, the support, the sponsorship, the whole thing from top to bottom surpassed our expectations,” Farm Fest Committee Chairman Noel Dennis said. “Farm Fest 2019 — which has been a long time coming — was truly phenomenal. The committee and I were blown away!”

Clarkton Farm Fest hosted an outdoor concert Saturday evening with a very popular local band, “The Pink Slips.” During the evening, dance-goers also had the opportunity to take home prizes and gifts in a silent auction.

“The Pink Slips put on a show like you wouldn’t believe,” Dennis continued. “They are always great, but Saturday night, they were awesome!”

Touted as the area’s premier party band, “The Pink Slips” played their usual wide variety of music. Over half of the band members are from Clarkton, and they got in the Farm Fest spirit by sporting throw-back “Clarkton Tobacco Festival” tee shirts on stage at Saturday’s dance.

“We had the infield at the Clarkton Dixie Youth Baseball complex full of people dancing,” Dennis said. “And the outfield was packed with chairs as other folks sang along, tapped their feet, clapped their hands, and just generally had a fantastic time.”

Almost 50 items were donated for the Farm Fest’s silent auction, including a signed painting by a local artist, fall wreaths, massages, gift certificates to local restaurants, photography sessions, a kid’s pedal tractor, home-made cakes, cider from a local winery, and an array of other gifts and prizes. “The amount of items in the silent auction was staggering,” Dennis said.

Her committee members went out and asked local businesses and individuals to make donations of items for the auction. “The committee just went out and said, ‘Please help us bring this festival back,'” Dennis commented. “And the Bladen community responded in a major way.”

Dennis said the evening had a “family” feeling, and that her committee planned it that way on purpose. “Farm Fest has always celebrated the farmers in our town, and, around here, farming involves the whole family,” she said. “So, we thought it important that Farm Fest include all ages.”

At the dance Saturday night, Dennis said they had babies in strollers who weren’t walking yet and also a Clarktonian who turned 89 on Saturday. “The Pink Slips sang ‘Happy Birthday’ to Mrs. Louise Quick on her 89th birthday,” Dennis added.
“And Miss Louise looked stunning in her red tiara as she accepted congratulations from the crowd.” There were all ages in between, too.

“What’s even more impressive than the huge turn-out Saturday night was the work the Farm Fest Committee put into this,” Dennis added. She said a small group met on August 7 with the intent of reviving Clarkton’s festival.

“Six weeks — just six weeks,” Dennis said, “and in that time the committee planned everything, booked a band, secured a venue, sold sponsorships, gathered auction items, and did a hundred other little things that made this such a success. We had just the best group of hard-working folks on the committee.”

An annual festival started in Clarkton in the early 1950’s and was held continuously until 2007. Originally started as Farmer’s Day, the celebration turned into the N.C. Tobacco Festival of Clarkton, and then eventually into Farm Fest. In 2007, the festival discontinued due to a lack of volunteers willing to serve on the committee.

“A few of us thought the time was right to start it back up, and we started passing the word. ‘Come and help,’ we said, and other Clarkton folks showed up,” Dennis concluded. “It just goes to show that a small group of people who love their little town can make a big difference.”

Next spring, the committee plans to continue Farm Fest with another dance — and maybe by adding back the parade, beauty pageant, arts and crafts fair, games, car show, and other activities that marked Farmer’s Days and Tobacco Festivals of yesteryear.