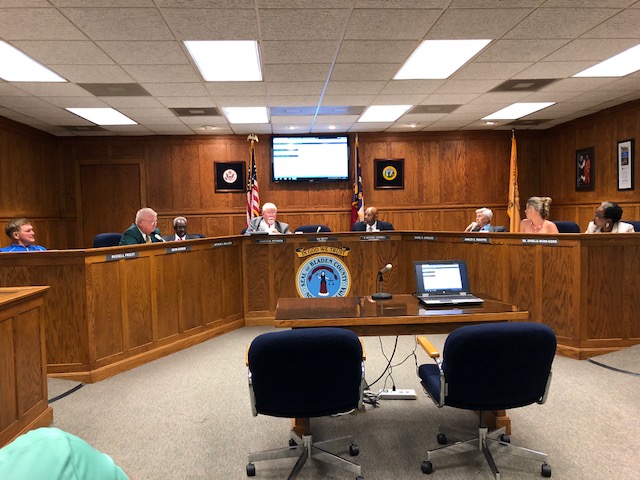 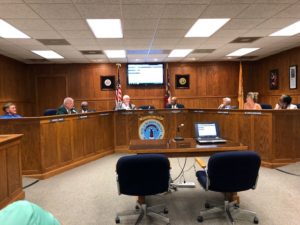 The Bladen County Board of Commissioners met in a special session on Monday afternoon to continue work on the proposed budget. The board approved budget requests from the Division on Aging and moved funds from contingency line item to the County’s general fund budget.

Department heads were offered the opportunity to address the board regarding their budget requests.

Kelly Robeson, Director of the Division on Aging, addressed the Commissioners first and asked to have a part-time Nutrition Coordinator’s position reclassified to full-time. She explained the job was originally fill-time and was reclassified to a part-time position.

“If we could convert it back, it would be very beneficial for our Seniors,” said Robeson.

The board voted to approve the request.

Bladen Community College President Dr. William Findt addressed the board to thank them for approving the budgetary requests from the college.

“We thank you for fully funding our budget,” said Dr. Findt.

Dr. Findt also discussed needs for BCC’s East Arcadia campus. He stated that the college had approached the town of East Arcadia about assisting with funding some repairs that are needed. Dr. Findt said the town sent a letter from the town’s attorney stating that it is a county issue.

No action was taken on the matter.

Bladen County Sheriff Jim McVicker told the board it could be worked out for inmates at the Bladen County Detention Center to be utilized instead if that was what the Board would like to do.

No action was taken regarding the matter.

Commissioner Peterson also made a motion to utilize $251,000 which was set aside as a contingency for new school construction and transfer it to the general fund to cover the cost of pay raises for county employees.

Martin told the board, if the measure was approved, the school system would view it as a reduction to their request.

After further discussion, it was pointed out the Board of Education’s request is a $1.7 million increase over the current year’s budget.

“Why are they going to losing students (to Charter schools) and we are giving them more money?” asked Commissioner Peterson.

There was no direct answer to the question.

There was also discussion that the Board of Education had asked for the $250,000 in contingency fund and an additional $250,000.

Commissioner Peterson’s motion was amended to move the contingency funds to the county’s general fund and to leave the remaining $251,000 in the Board of Education’s budget request.

This motion was approved.

The county wil meet again to address the budget on Wednesday, June 6th, at 4 p.m. in the Commissioner’s Meeting Room in the Bladen County Courthouse.