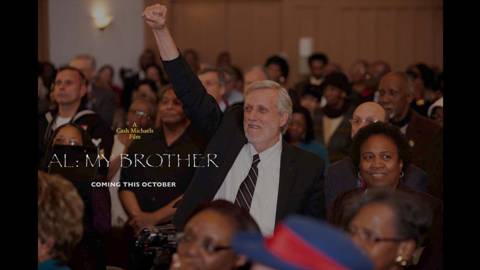 As part of its “Films that Matter” series the Carolina Civic Center Historic Theater in downtown Lumberton will be screening the newest documentary film by director Cash Michaels on Thursday March 7.  “AL: MY BROTHER” is the true story of white civil rights activist/attorney Alan McSurely, and his over 50-year battle against racism and white supremacy. At age 82 today, McSurely has worked alongside Dr. martin Luther King, Stokely Carmichael and Floyd Mckissixk, among other civil rights leaders.  McSurely also helped to recruit the Rev. Dr. William Barber to lead the NCNAACP for twelve historic years. “AL: MY BROTHER” is inspirational and instructive, and is being hailed as an important film about the civil rights movement.

“Al: My Brother” is an inspiring and instructive film for young and old, black and white, to come together, and demand a government that serves the needs, and the rights, of ALL Americans. Featured in the film are the Rev. Jesse Jackson; Rev. Dr. Benjamin Chavis; Congressman John Lewis; Bob Zellner, formerly of the Student Nonviolent Coordinating Committee; Prof. Tim Tyson, author of “The Blood of Emmett Till”; Ruby Sales, veteran civil rights activist; and Charmiane McKissick-Melton, daughter of legendary civil rights attorney Floyd McKissick Sr.

Cash Michaels, the producer-writer-director of “Al: My Brother,” is an award-winning journalist and filmmaker, having produced the 2014 documentary, ‘Pardons of Innocence: The Wilmington Ten.” He is also currently serving as an associate producer on the upcoming documentary, “Origin of the Dream,” about the social justice partnership of Dr. Martin Luther King Jr. and American poet Langston Hughes.

Tickets are $5 and can be purchased in advance noon-5:30pm weekdays through the theater administrative offices at 315 North Chestnut Street in Lumberton or by calling 910-738-4339 during those hours. Tickets also can be purchased at the door; doors open 6pm for the 7pm screening.

The Carolina Civic Center Historic Theater is a beautifully-restored treasure listed on the National Register of Historic Places that offers visitors a unique and visually stunning experience. The theater is located at 315 North Chestnut Street in the heart of downtown Lumberton.  First opened in 1928 as a vaudeville and silent film house, the theater offers a wide array of programming including live touring performances, original productions, art exhibits, films, special events and rentals. For more information visit www.carolinaciviccenter.com

Published in Lifestyles and Regionals