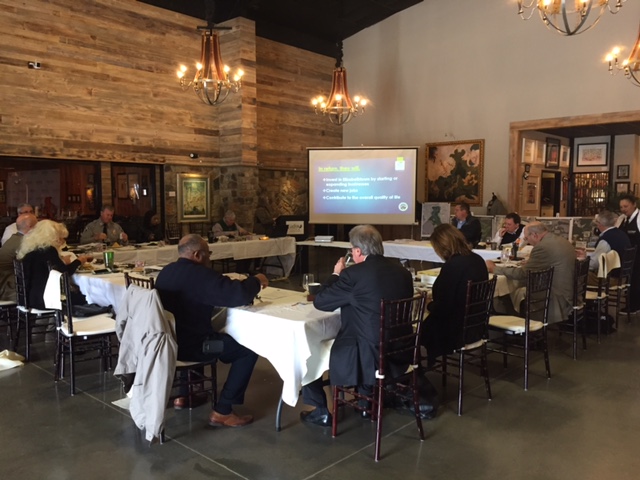 The Elizabethtown Town Council held their annual budget and planning retreat at Cape Fear Vineyard and Winery on Monday and discussed a variety of topics.

He also gave a crime summary for the past year as well.  Chief Parrish said that beginning in April of 2106, an aggressive traffic enforcement  program was under taken. This program included such things as traffic check points throughout the town, patrolling residential neighborhoods, and concentrating on the downtown business district late at night.

According to Parrish the local police department is divided into two divisions: Patrol and Criminal Investigations Division.

He also listed several accomplishments for the department. They include:

*the department has transitioned to new Glock firearms at no cost to the town.

*by participating in the Governor’s Highway Safety Program the department was able to obtain 5 new Golden Eagle Radar Units and 1 Alco Sensor at no cost to the department.

In the budget request, Chief Parrish said the department is requesting an additional $16,332 be added to the budget for the purchase of the following items:

*replacing one hand-held radio that was damaged.

Elizabethtown Fire Chief Nick West updated the board regarding the fire department’s activities from the past year.  Chief West said that over the past 10-15 years, regulations have increased, documentation requirements are higher and the training requirements have increased.

West told the board the new fire truck is exceeding expectations.

Chief West said if the Board decides to move to the color coded ring, then the department can go back to painting the fire hydrants red and placing the rings on the caps instead.

In his budget request, Chief West said the fire department is asking to be allowed to replace two apparatus with one truck. The two trucks which are proposed to be replaced are each about 25 years old, according to West.

He said the department is also introducing technology into its fleet of fire trucks with the addition of computers.

Recently the department held a training session and had six fire departments with a total of 36 firemen training on extrication.

She said currently, staff are working to create promotional materials for the program and working on outreach to the community.

Hall said there are different ways the NC STEP program can assist businesses. She said they can help them to start new businesses, help businesses expand, and such. The town has also set up a revolving loan program.

Next, representatives with W. K. Dickson spoke about the lighting for the Phase II Street Scape. They recommended a tear dropped shaped light on a pole. They said by going to this type of fixture, with the taller pole, the number of poles needed would be 19. The new lights that are proposed in the Phase II  Street Scape will be LED lights but they will be on a taller pole than those that are located in the downtown. They also said the newer LED lights give off better light than older model LED lights.

They also had looked at the lighting at the town hall and studied replacing them as well.