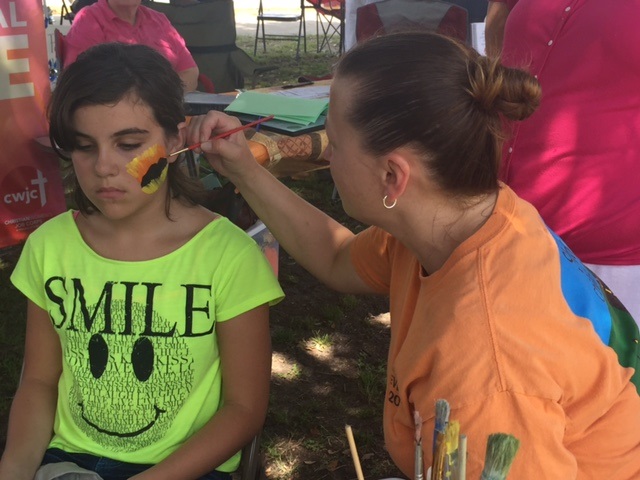 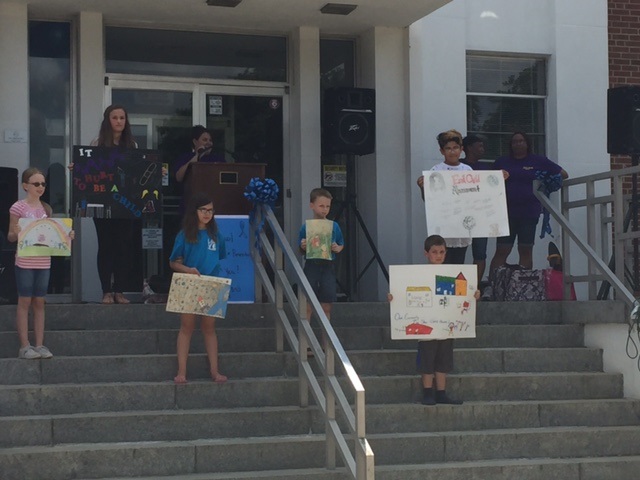 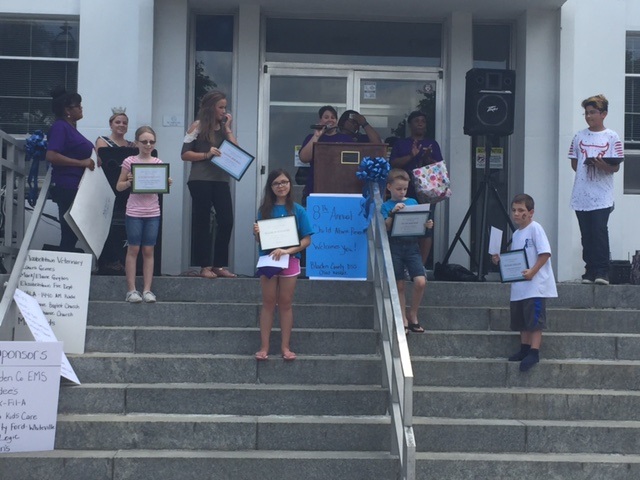 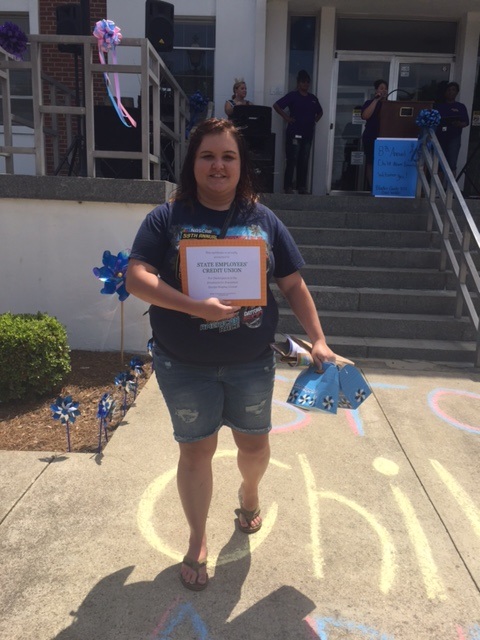 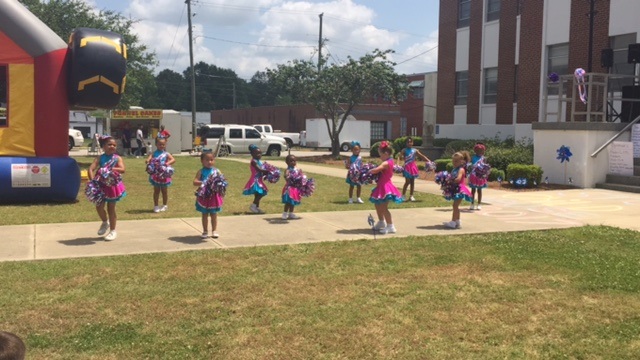 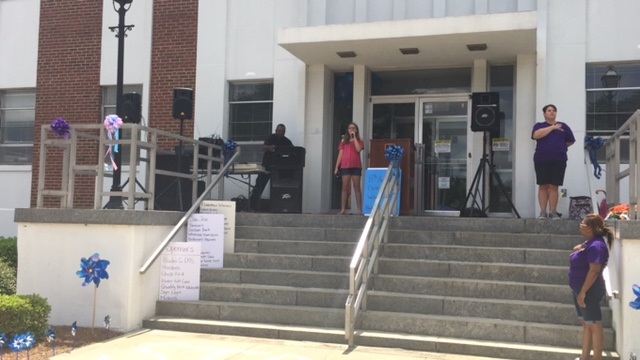 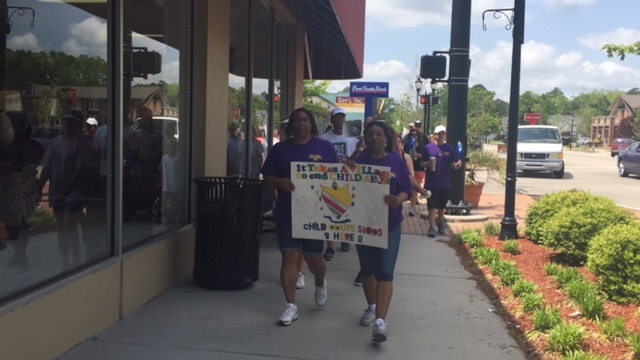 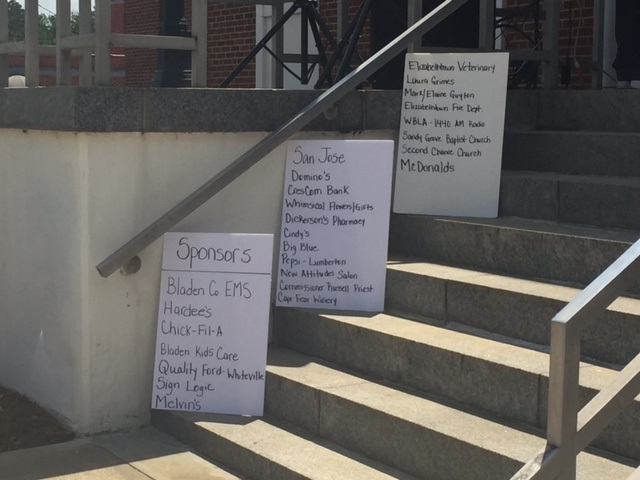 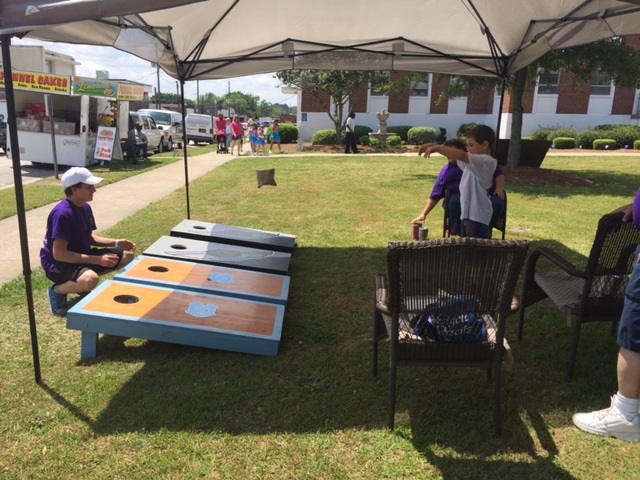 A warm, sunny Saturday brought many people out to the front lawn of the Bladen County Courthouse for the annual Child Abuse Awareness event. The afternoon’s events kicked off with a Child Abuse Awareness Walk which began at 1 p.m. at San Jose Restaurant. The walkers traveled along the sidewalk on Broad Street chanting “Help End Child Abuse!”

Once the walkers arrived at the Courthouse, the opening ceremony took place on the front steps with Addison Long singing the National Anthem and Jessica Graham giving the invocation. Jill Sampson, Supervisor of the Bladen County Department of Social Services Child Welfare Unit, said, “This event is for the celebration of children and families and bringing awareness to community of child abuse and neglect.”

Crystal Slater, of the Bladen County DSS Child Welfare Unit, explained to those gathered that the pinwheels people see throughout the county are a reminder of Child Abuse Prevention month. The pinwheels are used nationwide to raise awareness of child abuse. The Bladen County DSS staff held a pinwheel garden contest and the top three winners were Bladen County Hospital, State Employees Credit Union and the winner was Kid’s Rock Children’s Ministry.

A poster contest was also held that saw 130 entries. The winners were:

There were also door prizes given away. Sampson said McDonald’s donated 40 happy meal and Hardees donated 20 biscuits for the event. There were also free hot dogs available and Second Chance Church was offering free pop corn. There was also food available for purchase.
There was plenty for everyone to see and do. Booths included Girl Scouts, face painting, Families First held sack races and there was a corn hole game and a Bounce House. DJ Scooter Fresh also played a variety of music as volunteers and event goers joined in for a line dance or two.

Crystal Slater, of the Bladen County DSS Child Welfare Unit told those gathered that a report of child abuse is made every 15 minutes and in the past year there have been 126,962 children in North Carolina with investigation reports of child abuse.

“It impacts entire community,” she said.

Miss UNC-Pembroke DeAndrea Crockwell also addressed the crowd. “Even though we try to raise awareness of child abuse we must learn how to recognize the symptoms.” Some symptoms can include changes in behavior and regression or withdrawal from friends and peers. Another symptom can be a child shying away from touch. Crockwell said if you notice these symptoms, talk to the child. She added if you are not comfortable talking to the child, ask a trained professional to talk to the child.

Patrick Lewis, one of the volunteers for the event, said he came out to help because of his daughter and the event’s focus of preventing child abuse.