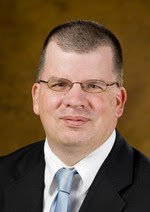 ROCKY MOUNT – Dan Gerlach, the president of the Golden LEAF Foundation for the past 10 years, today announced to the Golden LEAF Board of Directors that he would resign his position effective May 3, 2019. Gerlach leaves to serve as interim chancellor of East Carolina University, effective May 6, 2019.

“The decision to leave Golden LEAF was not an easy one,” said Gerlach. “I have been honored to work with dedicated and passionate Board and staff members, and hope that in some small way, rural and tobacco-dependent North Carolina is better for our work.”

During Gerlach’s tenure, the Foundation:

*Grew its endowment from $650 million to $1.1 billion;
*Awarded over 1,100 grants totaling over $550 million;
*Leveraged $100 million in federal funds to extend middle-mile broadband service across rural North Carolina;
*Helped thousands of North Carolina higher education students attend college and gain access to leadership development and internships; and
*Took on new responsibility to construct and execute grants programs for communities and individuals recovering from Hurricanes Matthew and Florence, leading to the award of 167 grants totaling over $80 million to date.

“On behalf of the board, I would like to thank Dan for his service,” said Randy Isenhower, chair of the Golden LEAF Board of Directors. “His work ethic, focus, collaborative nature, knowledge of the state, and sense of humor benefited us all, and will benefit ECU. We wish him all the best.”

The board of directors also acknowledged Ted Lord, Senior Vice President/Staff Attorney of the Foundation, who will serve as acting president effective May 6, 2019. Mr. Lord has served at the Golden LEAF Foundation for over 13 years.

“The Foundation will be in steady hands with Ted as the acting president, supported by the Foundation’s staff,” said Isenhower. “We will begin a search to find the next permanent president very soon.”