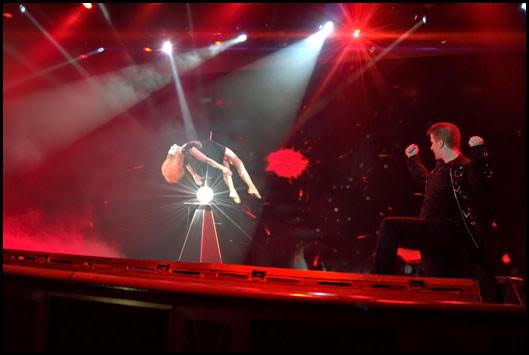 Hawley Magic to perform at Carolina Civic Center in Lumberton

The Carolina Civic Center Historic Theater in Lumberton, NC will host Hawley Magic on Saturday, April 13th, at 7 p.m.  They will perform their Las Vegas style illusion show that includes one of a kind grand illusions, expert sleight of hand close-up magic, and Houdini-inspired escapes.

A few of their accomplishments include being finalist on America’s Got Talent, being nominated for Princess Cruises Entertainer of the Year, and featured on the UK’s award-winning TV show The Cruise. They also were the closing act for the world’s largest magic convention, and were resident illusionist of Princess, Disney, MSC, and Costa Cruise Lines.  This is a high energy, action packed show that is great for all ages.  Howard Stern called Hawley Magic an A+ act!

Tickets are $20 with general seating format. Tickets can be purchased any time on-line at www.carolinaciviccenter.com or in person and telephone noon-5:30 pm weekdays through the administrative offices on the theater’s 2nd Floor (use 4th Street entrance), or by calling the theater at 738-4339 Ext. 1.The Theater lobby box office opens for ticket sales one hour prior to a performance.

The theater is located at 315 North Chestnut Street in downtown Lumberton. Go to www.carolinaciviccenter.com for promotional video.

Hawley Magic are husband and wife, internationally renowned illusionists, Jonathan and Trisha Hawley.  When not performing around the world they reside in Trisha’s hometown, Shelby, NC.  Jonathan is from a tiny village outside of Nottingham in England.  They met 16 years ago as professional dancers while performing on a cruise ship, got married 14 years ago, and have been performing magic together for 13 years.  Together they created Hawley Magic from the ground up and work side by side to produce a visually stunning show.  After making it to the finals of America’s Got Talent, Princess Cruise Lines booked them straight away and have kept them working contract after contract ever since.  Now they are taking their show on tour and are very excited to perform at the beautiful Carolina Civic Center in Lumberton, NC.