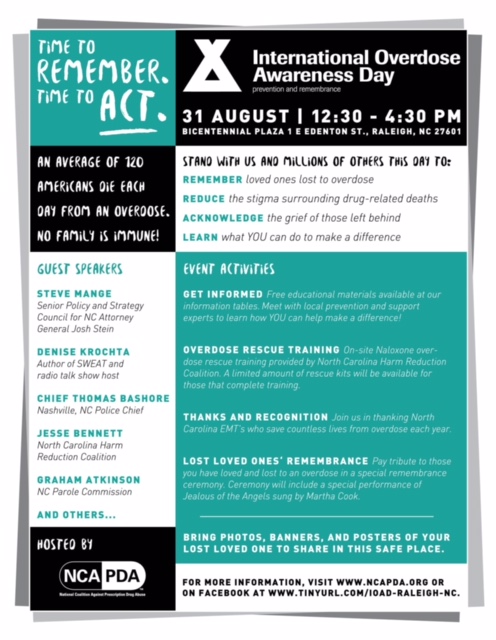 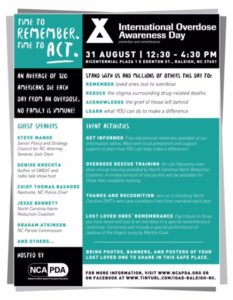 The International Overdose Awareness Day will be celebrated in Raleigh on Thursday from 12:30 p.m. until 4:30 p.m. at the Bicentennial Plaza. The event is being hosted by the National Coalition Against Prescription Drug Abuse.

Every day, lives are lost all across the United States due to overdoses. According to data released by the NC Association of County Commissioners, there were 1.3 prescriptions for Opioids written per resident in Bladen County in 2016 and there were 101.1 pills per resident in Bladen County in 2016. According to NC Department of Health and Human Services data, in 2016, opioid-related deaths were up by 20 percent in North Carolina from the previous year.

In 2015, more than 15,000 people died in the US from opioid overdoses alone, according to data from the Centers of Disease Control  (CDC) in Atlanta, Ga. The overdose rate for opioids is highest among those between the ages of 25 and 54.

The goal of the National Coalition Against Prescription Drug Abuse is to prevent the abuse of prescription drugs and deaths caused by overdose. Guest speakers for Thursday’s event will include Steve Mange, Senior Policy and Strategy Council for NC Attorney General Josh Stein; Denise Krochta, author of SWEAT and radio talk show host; Chief Thomas Bashore, Nashville NC Chief of Police; Jesse Bennett with the North Carolina Harm Reduction Coalition; Graham Atkinson with the NC Parole Commission and others.

The event will include educational materials and the opportunity to meet local prevention and support experts. There will also be on-site rescue training provided by the North Carolina Harm Reduction Coalition. There will also be a limited number of rescue kits available.

There will also be a Lost Loved Ones Remembrance and a thanks and recognition for EMTs who save numerous lives from overdoses every day. Everyone is encouraged to bring photos, banners and posters of your lost loved one to share.

Want to go? The Bicentennial Plaza is located at 1 E Edenton Street in Raleigh. For more information visit www.ncapda.org or Facebook at www.tinyurl.com/ioad-Raleigh-NC.