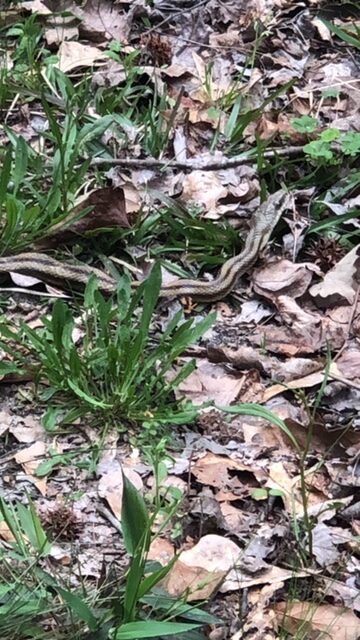 Freeman’s advice is if you see a snake, don’t panic. Leave it alone and walk away.

A lot of snakes are completely harmless and, if given enough time, a snake will usually move out of the area on its own according to Freeman.

Most snakes, even venomous ones, are reluctant to bite because they use their energy or their venom to acquire food, and they don’t view humans as a food source. Most snake bites occur when a person picks up a snake, steps on one accidentally or tries to kill one, Freeman shared.

In North Carolina, four of the six venomous snake species are protected. The pigmy and timber rattlesnakes are listed as species of special concern while the Eastern diamondback rattlesnake and Eastern coral snake are listed as endangered. None of these four species of snakes should be handled or disturbed without a permit issued by the Commission.

North Carolina is home to 37 native snake species. Of the six snake species that are venomous, only one, the copperhead, is common and can be found across the state. In many areas, including most of the larger urban regions, it is the only venomous snake. Because of their ability to live in a wide variety of habitats — from wooded areas to mountain ridges to suburban backyards — copperheads generate the most phone calls from people who think, often mistakenly, that they have one in their yard.
Regardless if a snake is venomous or non-venomous, snakes pose little threat to pets and children — if left alone. When confronted or harassed, snakes are more likely to flee than they are to bite.

However, if given no escape route or restrained, they will bite or lunge toward their perceived aggressor to defend themselves.

For other questions regarding human-wildlife interactions, call the Commission’s new N.C. Wildlife Helpline toll-free at 866-318-2401. The call center is open Monday through Friday (excluding holidays) from 8 a.m. to 5 p.m.