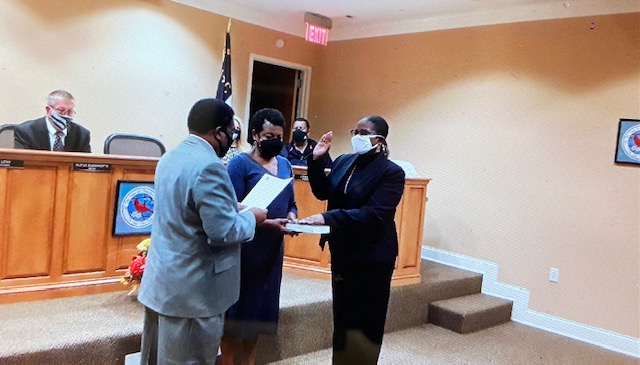 Mayor Rufus Duckworth gaveled the Bladenboro Commission meeting to order at 6 pm, Monday evening, January 11th to a packed house. Commissioner Greg Sykes provided the invocation, and the Pledge of Allegiance was recited by those in attendance.

Lisa Levy, chosen from a field of five candidates to replace now-County Commissioner Rodney Hester, then stood before the dais to be sworn into office by NC State Representative Garland Pierce. She received a standing ovation from both elected officials and the audience.

In that audience were many of her friends and family, who wished to be present at this historic occasion.

Although certainly not the first Black Town Commissioner, Ms. Levy – now Commissioner Levy – is the First Lady of Color to have been seated on the Bladenboro Board.

As there were no petitioners to appear before the Commissioners in Open Forum, the Board turned to the Consent Agenda, which was unanimously approved without comment.

The first item of Old Business was the annual renewal of the Engineering Services Agreement with LKC Engineering as required under CDBG Project 15-1-3086 for installation of utility standby generators; as expected, there were no objections and this item was approved unanimously.
Also unanimously approved was the acceptance of a $300,000 grant from the State Legislature for the “New Town Square” Revitalization Project; included as part of that approval was authorization for the Mayor to execute documents relevant to the grant.

As a result of the action taken at the December 22nd meeting regarding ownership of the south wall of the Medicine Shoppe/north wall of the recently-demolished Hester Services building, a Field Survey was recently undertaken by Lloyd R. Walker, PLS to determine ownership of that wall.
His determination was that the wall is on the Medicine Shoppe side of the property line, not the Hester Building’s side. The Board then tabled further discussion of this matter until next month in order to obtain quotes to put right the damage to the wall when the Hester Building was taken down by the Town.

The only item of New Business was to consider a Change Order on the McLean Park project to address drainage issues at the little league field where the first baseline becomes waterlogged, and additionally to clear the tree line behind the outfield fence. This Change Order was approved on a unanimous vote.

Town Administrator Oryan Lowry, in his Administrator’s Report, updated the Board on the status of the new ball field, stating that grading is complete, and the contractor is merely waiting on the weather to cooperate so they can lay the sod.

On the emergency utility generators, Mr. Lowry informed the Commission that the wiring has not yet been completed; the generators are currently with the contractor in Red Springs, waiting for the installation of the concrete pads.

Concerning the New Town Square project, lead paint retesting was completed on January 8th; and, once those test results have been received, the Town can proceed with issuing Requests for Quotes (RFQs) for the demolition of those three buildings.

With no further business to be considered, the meeting adjourned at 6:35 pm.