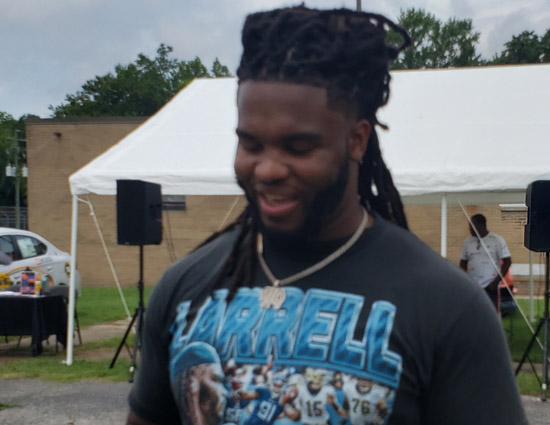 East Bladen graduate Larrell Murchison was credited with a tackle Sunday in the Tennessee Titans’ 35-10 loss against the Philadelphia Eagles at Lincoln Financial Field.

Murchison and Rashad Weaver stopped Philadelphia’s Miles Sanders for 1 yard on a run up the middle with 13:13 remaining in the fourth quarter. Sanders later scored on the drive on a 3-yard run for the final points of the game.

Murchison, who was on the inactive list Nov. 24 in Tennessee’s 20-16 loss against the Cincinnati Bengals, has played in five of the last six games for the Titans after being on the practice squad for the first six games this season. He assisted on a tackle Oct. 30 in Tennessee’s 17-10 win at the Houston Texans.

Tennessee dropped to 7-5 and has lost two straight. The Titans remain in first place in the AFC South, 2 1/2 games ahead of second-place Indianapolis (4-7-1).

The 6-foot-2, 297-pound defensive lineman is in his third year with the Titans after being selected in the fifth round of the 2020 NFL draft out of N.C. State. He played in 21 regular season games his first two seasons, including five starts in 2021.

Murchison was assigned to Tennessee’s practice squad at the end of this preseason. He was activated from practice squad to the game roster three times earlier this season before being reassigned to the practice squad, which is the maximum allowed by NFL rules. The Titans signed him to the 53-man active roster on Nov. 15.