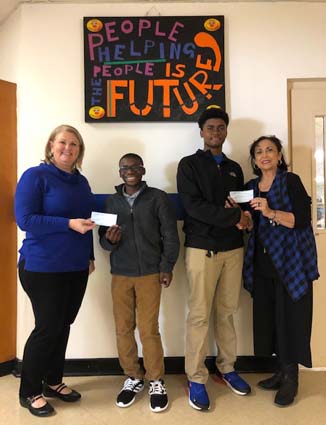 The young leaders along with their parents and mentors hosted the first Reindeer 5K Run fundraiser on December 7th at the Town of Elizabethtown Industrial Park. It was a successful event with around 65 people participating, according to the organizers. Over $2,000 was raised to help the North Carolina clubs and the hurricane victims. The checks for the non-profits and the hurricane victims were presented this month by the NC Junior Beta Club and the Youth Ambassadors of Men and Women United for Youth and families.

Dr. Jason M. Wray took first place in the run followed by Mr. Joe Luther, who came in second place. Third place went to Ms. Grace Thompson. Each received a trophy for their efforts. Each participant receive a T-shirt.

President McElveen came up with the idea for the event because he wanted to make a difference in his community and his state while he held the State office. He said, “I think the Reindeer 5K went amazing for it to be the first year! I also plan to see it continue every year, and find a new cause every year to donate the money to.”

He added, “Let us lead by serving others!”

NC Junior Club Beta members from across the southeast came out to support the event as well as the Youth Ambassadors committee members. Bladen County School principals, teachers and other leaders participated in the event as well.

The club members also wanted to give a special thank you to Mr. Bob Mundy and the event sponsors. “We couldn’t have done it without them,” they said.

“Mr. Mundy used his expertise to help lay the track out and helped make sure everything ran smoothly. The event sponsors were a great assets to our cause,” the group continued, “Thank you, Mr. Mundy, BladenOnline.com, Cape Fear Heating & Cooling, LLC, Community Support Agency, Kidz N Motion, and Men & Women United for Youth and Families.”

The organizers are planning another Reindeer 5K Run for next fall or winter. The date and time will be announced later.