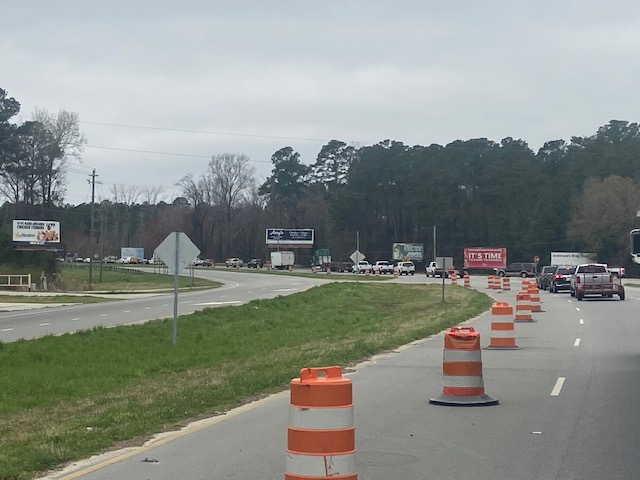 UPDATED: One More Day of Paving and Striping on 701 Bridge in Elizabethtown

On Tuesday, the bridge’s traffic over the Cape Fear River in Elizabethtown on U.S. Highway 701 was delayed. Andrew Barksdale with the North Carolina Department of Transportation gave an update on Monday morning. The NCDOT subcontracted workers planned to make the lane closures on Monday, March 29, 2021; however, they plan to reschedule the lane closures due to the weather forecast. At this time, a new date for the lane closures has not been announced. If weather permits, the lane closures may take place tomorrow, Tuesday, March 31, 2021.

On Tuesday, the bridge’s traffic over the Cape Fear River in Elizabethtown on U.S. Highway 701 was delayed. Andrew Barksdale with the North Carolina Department of Transportation gave an update on Tuesday afternoon. The NCDOT contracted construction workers made changes to the traffic pattern starting on Wednesday morning with the supervision of the NCDOT.

Barksdale stated, “One of the changes was to actually open the bridge back up to two-way traffic for short periods of time during the day.”

As a result of the traffic, one more day is needed to complete this construction phase. On Monday, March 29, 2021, there will be lane closures to finish this part of the project on the bridge.

Construction workers will complete paving, striping, and shift traffic onto the new pavement. As long as the weather permits, the construction causing traffic delays should end Monday afternoon.

The construction work is from 9 am until 4 pm.

LAST YEAR, the N.C. Department of Transportation awarded a $23.3 million contract to Smith-Rowe LLC of Mount Airy to construct a four-lane bridge alongside the existing one, which used to carry only southbound traffic. (The northbound bridge has been demolished.) The new bridge will be built in phases, allowing bridge traffic over the river during construction.

When two lanes of the new bridge is completed, traffic will permanently shift onto it in 2022; the southbound bridge will then be demolished, allowing for the completion of the four-lane bridge by May 2024.

Tags: One More Day of Paving and Striping on 701 Bridge in Elizabethtown