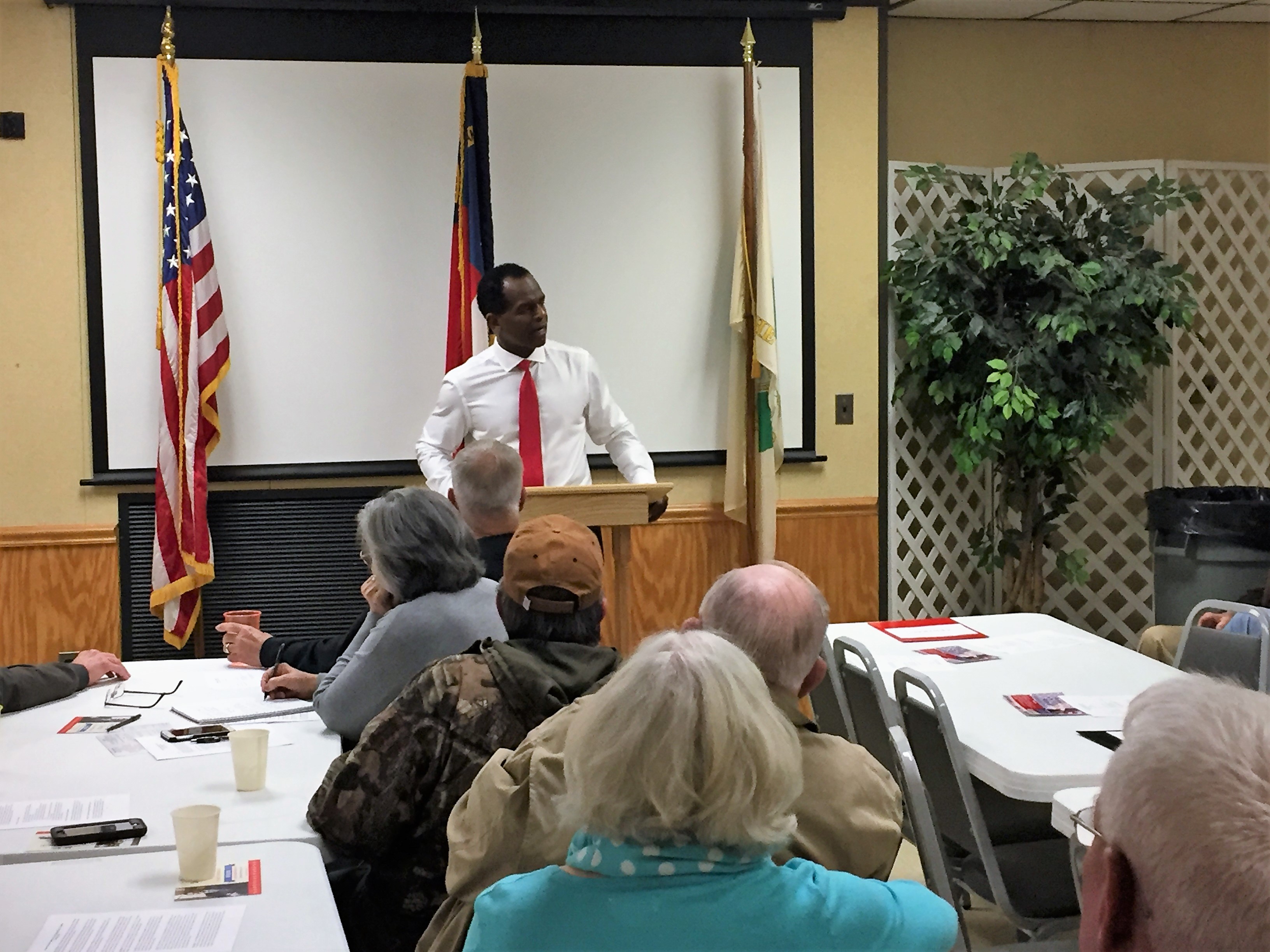 Bladen County Republicans (BladenGOP) hosted their annual GOP convention on Monday, March 26 th at
the Powell-Melvin Agricultural Hall, and, judging from the reactions and comments from convention
attendees, it was clearly an outstanding success!

Keynote speaker for the crowded convention was Mr. Chuck Smith of Virginia, whose background
experience includes the practice of law for over 37 years, and which includes a combined military career
in both the U.S. Marine Corps and the U.S. Navy, retiring as a Navy Commander and a member of the
U.S. Navy JAG Corps. Mr. Smith also enjoys several board or foundation positions within Virginia, and
Virginia Beach, as well. (see his website at: www.mc4America.com)

Mr. Smith quickly captured the attention of the convention audience when he posed several questions
about the U.S. constitution, especially the Bill of Rights. He challenged convention attendees about each
of the first 10 Amendments especially, and suggested that even a superficial knowledge of these
Amendments is absolutely essential for every American to know, lest we lose (or abuse) the very
freedoms which the genius and the intellect of our Founders labored to ensure for us. Significantly, Mr.
Smith noted that the civil and personal rights enumerated within the Bill of Rights cautions the Federal
government, in that it “shall not” restrict, deny, or abuse the personal or civil rights of its citizens. Most
important, according to Mr. Smith, is the 10 th Amendment, which makes it explicitly clear that authority
which is not otherwise specifically delegated to the Federal government is reserved to the states, or to
the people. As one convention attendee noted, “It was the right speech, at the right time!”

In addition to the speaker, District Court Judge W. Fred Gore introduced several elected officials who
were present, and also introduced several of the candidates who are seeking county-wide or
congressional office. The candidates and speakers were enthusiastically received by convention goers,
and each candidate confidently asserted the need for a return to solid, common sense conservative
principles at both the local, state, and Federal levels. As another convention goer observed, “I’m no
longer a member of the opposition party, simply because I left it. It’s because the opposition party left
ME!”

For more information about the conservative, constitutional values of the Bladen County GOP club,
contact the club at: bladengop.secretary@gmail.com, wmcduffie@ec.rr.com, or find the club on
facebook at: BladenGOP.