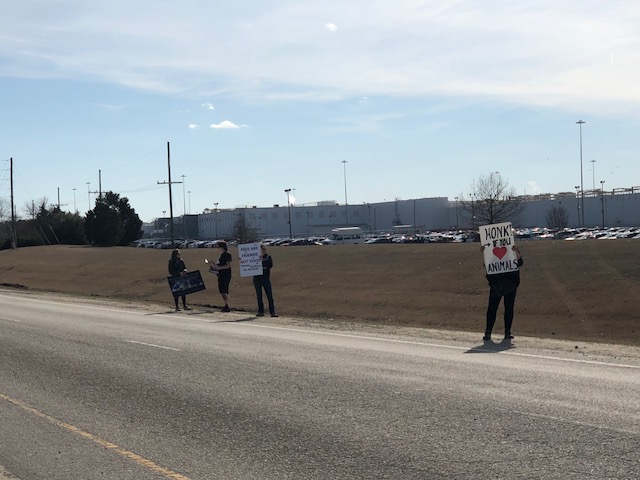 A group called Vegan Outreach was protesting outside the Smithfield Foods plant in Tar Heel on Thursday afternoon. Law enforcement officials on the scene estimated 150 protesters were present at the facility.

The protesters were lined up behind yellow police tape and shouting, “Animal liberation. Shut it down.” 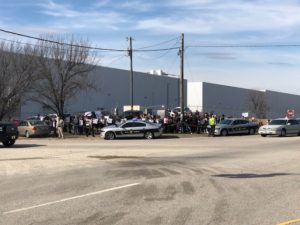 Law enforcement officers with the Bladen County Sheriff’s Office and North Carolina Highway Patrol and Smithfield Company Police kept a watchful eye on the protesters and directed traffic in and out of the plant because of the protest.

Two officials from Smithfield Foods were also watching the protesters but refused to comment. 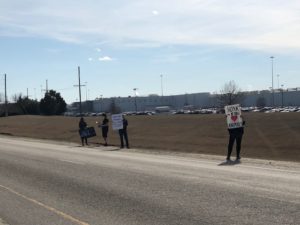 Vegan Outreach, which is headquartered in California, touts itself as an advocacy group for animals. The group’s website states they are attempting to expose cruelty in slaughterhouses and cruelty on factory farms. Their website states, “Vegan Outreach is a 501(c)(3)

Patricia T., one of today’s protesters, said, “I’m standing here to give a bit of a voice to the animals. A pig’s life matters to the pig.”

She also explained that she is passionate about animals. Patricia recounted how she once drove 15 hours to Florida to protest the conditions of Lolita, an Orca whale captured in the wild, and taken to Miami’s Seaquarium.