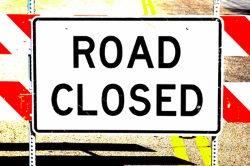 SR 1137 – McKee Road is being patched back this morning.  It will open either late today or first thing Tuesday morning (will provide a follow-up later today)

NC 211 – Is scheduled to be paved back Monday afternoon.  The road will probably have to remain closed overnight to allow pavement to cool sufficiently, so plan on first thing Tuesday for opening (will verify this in the afternoon update)

NC 131/242/410 – Main Street in Bladenboro will close early Tuesday morning.  A signed detour will be posted for through traffic to use SR 1171 (Old Abbottsburg Road) / SR 1003 (Twisted Hickory Road) / NC 211.  This crossing will be closed until late Wednesday evening or early Thursday morning.

NOTE:  For emergency services – be advised that Ash Street and Grief Street in Bladenboro will remain open for access across the tracks; however, this will be the only way across for the next couple of days.  WE ARE NOT SENDING THRU TRAFFIC / TRUCK TRAFFIC THIS WAY DUE TO WEIGHT POSTINGS AND / OR INSUFFICIENT TRUCK TURNING RADII ON TOWN MAINTAINED STREETS

SR 1179 – Bryant Swamp Road will be closed Tuesday morning and will remain closed until late Wednesday or early Thursday.

SR 1178 – Richardson Road will remain open for the duration and will be replaced at a later date.

SR 1128 – Barry Lewis Road will be closed Wednesday morning and will remain closed until Thursday evening or Friday morning.

Update later today (Monday)  The good news…..they will be gone by Friday and the tracks will be good to go for another 10 years.