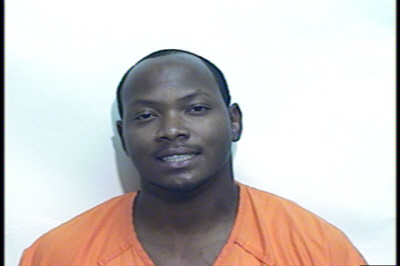 One of the suspects in Tuesday’s PNC bank robbery in Lumberton has been arrested, according to Michelle Tatum, a spokesperson with the Columbus County Sheriff’s Office.

Jeramie Ross Vaughn, 29, of Bitmore Road, Whiteville, was arrested on Wednesday night on Peacock Road after a citizen spotted him in his yard, according to Tatum. He made his first appearance in Robeson County Court on Thursday and is being held under a $1 million bond.

“A homeowner saw him on his property and a deputy drove by at the same time the homeowner located him,” said Tatum.

Vaughn was taken into custody by Columbus County Sheriff’s Deputies and agents with the Federal Bureau of Investigation (FBI) picked him up, said Tatum.

Vaughn is  charged with:

*Felony possession of a firearm by a convicted felon;

*five counts of felony assault on a law enforcement officer with a firearm;

*Felony robbery with a dangerous weapon;

*felony conspiracy to commit robbery with a dangerous weapon.

According to the FBI, four suspects walked into the PNC Bank in Lumberton on Tuesday afternoon at 3:30 p.m. and robbed the bank. The suspects left with an undisclosed amount of money.

The suspects fled in a grey colored Saturn automobile. Officers pursued the vehicle and the suspects exited the vehicle in various locations. The suspects led law enforcement officers on a chase which included two counties. Shots were also fired at officers during the chase and officers returned fire; however, it is not known if any of the suspects were wounded. No police officers were injured.

Federal, state and local law enforcement agencies including the FBI and Bladen County Sheriff’s Office were involved in the manhunt in Columbus County which ended on Wednesday afternoon.