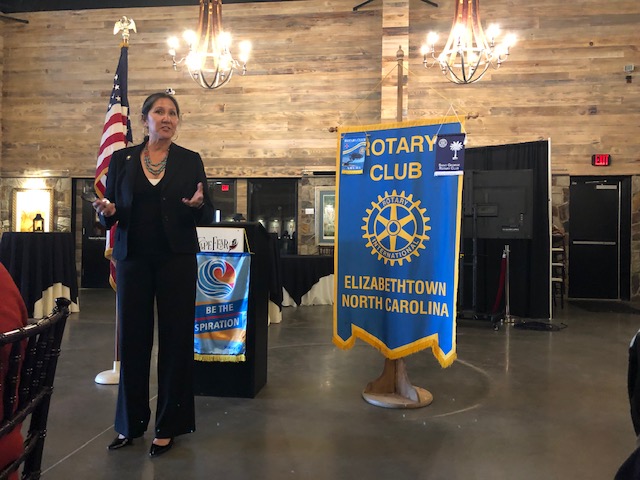 April Clark, who is the Rotary District Governor for the Elizabethtown Rotary Club, spoke to the local club on Wednesday. Clark, who resides in Swansboro, is a member of the Jacksonville Rotary Club.

She spoke about the grant opportunities available through Rotary for non-profits, business and individuals for hurricane relief.

“The district has received a lot of support from all over to help with hurricane relief,” Clark said.

Over $250,000 was distributed this year for hurricane recovery by the District Rotary Clubs and other local Rotary Clubs, according to Clark.

Todd Lyden, with the Bladen Community College Small Business Center, also announced the Selling Made Simple for Service Businesses seminar by Michael Barbera with Clicksuasion Labs on Tuesday, March 12, from 4 p.m. until 5:30 p.m.

Lyden also announced the schedule of webinars and other classes being offered by the center.

Billie Hall and Eddie Madden, with the Town of Elizabethtown, reminded club members about the Revolving Rural Business Loan Center offering business owners up to $25,000 loans for new businesses of businesses wanting to expand. Madden also reminded Club members about the ribbon cutting planned for Friday, March 1, at the new airport terminal on Airport Road in Elizabethtown.

Also, Rotarian Michael Leinwand reminded the club members that on May 17th the Elizabethtown Rotary Club will have their annual Golf Tournament.