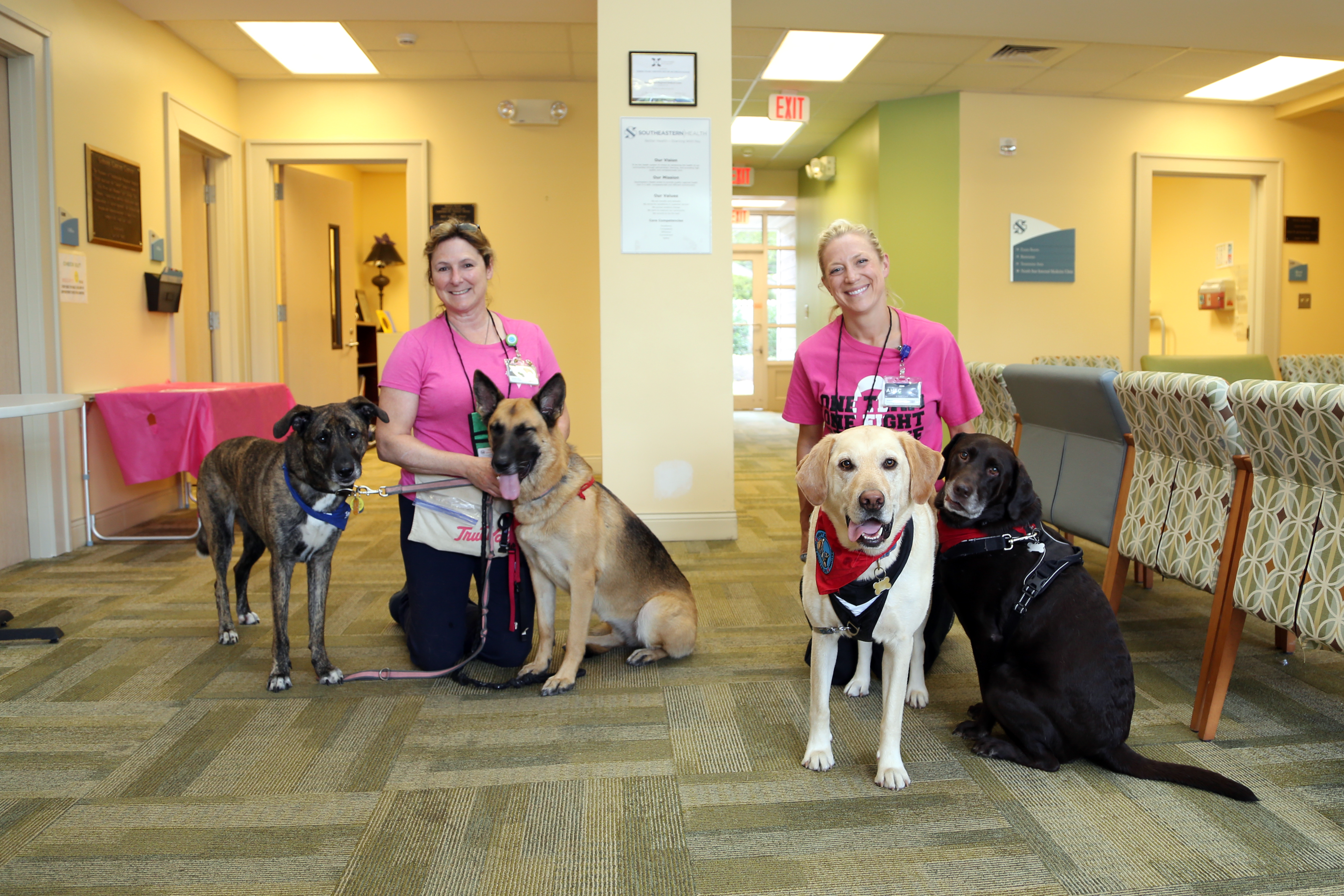 Myron is not a therapist, but he listens calmly and attentively to patients who are scared or sad, and he often makes patients feel better. He also lets patients pet and cuddle him, as long as they don’t mind a little shedding.

A frequent visitor to nursing home residents, Myron, along with other registered therapy dogs, is now also welcome at the Gibson Cancer Center and will soon be able to visit patients at all Southeastern Health facilities, thanks to a new SeHealth policy. As a Therapy Dogs International (TDI) registered therapy dog, Myron – along with his friends Minnie, Luke and Buddy –  recently visited the Gibson Cancer Center to spread a little dog-shaped joy.

One of the patients at Gibson, St. Pauls resident Theresa Turner, was not only glad to see the dogs, but knew all about how valuable they can be for some patients.

“When I worked in a nursing home, it made all the difference in the world,” Turner said. “We had one gentleman, he was not doing well at all, and I brought a dog into his room and he just petted and petted and petted the dog. He didn’t want to let him go. Two weeks later, I brought the dog back, and they said his health was improving, and all he kept doing was wanting to see the dog.”

Turner said she thinks that the dogs bring a vibrance and vitality to patients that helps them improve.

Myron’s owner, Physician Assistant Cat Gaines, works at SeHealth’s Gibson Cancer Center in the Navigation Department. Along with the German shepherd mix, she also owns another German shepherd therapy dog, Minnie, who is a local rescue. Physician Assistant Windy Christy, who works in patient navigation at Gibson as well, owns Buddy, a chocolate Labrador retriever, and Luke, a yellow Labrador. They are frequently joined by Sadie, a great Pyrenees owned by Sue Dickason.

Unlike service dogs, who wear vests and are not supposed to be petted by strangers when they are “working,” TDI therapy dogs wear bandanas and their training mostly centers on the idea that they respond well to being petted by strangers, especially those who might use some type of service equipment, such as a wheelchair.

“These guys have been to Wesley Pines, they go there about once a month. Sue takes Sadie there every Sunday,” Gaines said. “This week we are also going to a children’s camp to do therapy with the children and to teach them dog safety. Now that Southeastern Health has passed this policy, we will start going almost anywhere in the system that desires a therapy dog, if they have a need we can service.”

Gaines said she wanted to get involved with therapy dogs after seeing how a dog helped a wounded soldier in Iraq. She started with her first therapy dog in 2013.

“We had a young man that woke up with no legs below his knees, and he was not speaking to anyone. We also had a bomb-sniffing dog that was bored at the time, because things had kind of calmed down at that point,” Gaines said. “So, they took the bomb-sniffing dog to the guy, and within an hour that young man was talking, and he was engaging with the staff. That was just the dog. That’s why I do it, because I believe this is medicine and it’s a medicine that is far and away sometimes better than what I can offer.”

Christy said she first learned about therapy dogs from Gaines, and knew Luke would be great at it.

“When we got Luke, his temperament was just so loving,” Christy said. “I didn’t even know therapy dogs were a thing, but I loved sharing him with everybody. Cat told me about the program, and that they have training up in Fayetteville with Cape Fear Dog Training. I said, ‘Gosh, well, let’s just go ahead and do that.’ He was really smart and responsive and sweet tempered, so we took the class, but when he was one year old he didn’t pass because he had too much energy. Now he’ll be five in October, and when we retook the test last fall he passed with flying colors. When we got Buddy, it was the same thing. We just love to share them with other people.”