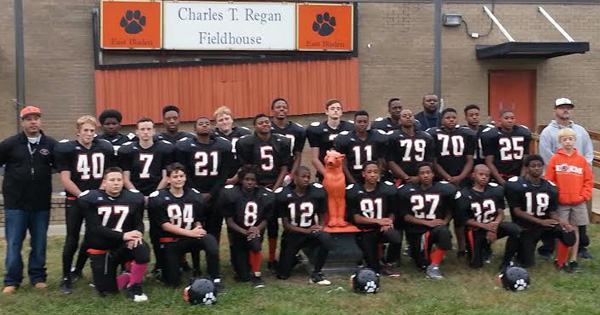 After a scoreless first half, the Cougars took the second-half kick-off and drove 60 yards for the touchdown.

The Cougars had one second quarter drive stopped inside the Bladenboro five hardline by a fumble that the Bulldogs recovered.

“It was another great defensive game by our guys,” said Elizabethtown Coach Ricky Whitaker. “This was our third defensive shut-out in a row. The defense has really stepped up.”

The Cougars finished a perfect 6-0 on the season. It was the third undefeated season for Elizabethtown Middle in the last 5 years.

“Majuan McKoy, Jordan Robinson and Cody Butler carried us to the championship,” said Coach Whitaker. “LeFrederick Wooten made a big tackle on their last play.”

“I was really proud of our boys,” added Coach Whitaker. “We had 22 seventh-graders and only ten eighth-graders on the team.”

“It was a tough loss,” said Bladenboro Coach Steve Thurman. “I thought we got a lot out of our kids.” The Bulldogs finished in second-place in the league with a 4-2 record.