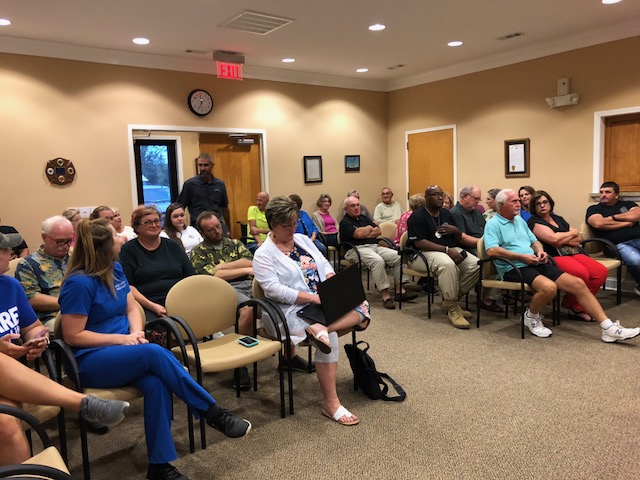 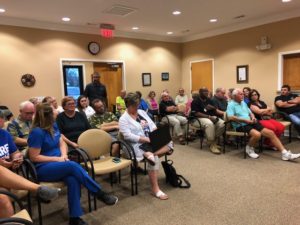 The Bladenboro Town Board conducted a special called meeting Monday night, and voted to approve the hiring of Sykes Paving Company to assist the town staff with storm debris removal inside the town at a cost of $10,000.

The board also asked residents and business owners to separate leaf and limb, metal, and construction debris before it is picked up. One truck was turned around from the Bladen County Solid Waste site. The town’s truck had to bring the load back and the debris had to be resorted due to one piece of metal.

Interim Town Administrator, Melanie Hester, told the board the requirements for FEMA reimbursement to the town have changed since Hurricane Matthew. She noted the town needs to be very careful about documenting storm-related expenditures to ensure reimbursement.

Teresa Horton, owner of Lollie’s on Main, asked “How many people have been informed of the need for the debris to be separated?”

She added that business owners and residents cannot do what needs to be done to sort the debris, if they are unaware of how to separate it.

Many business owners and residents also gathered at the meeting to hear the discussion. Several of those gathered expressed their displeasure with the fact their homes and businesses have been flooded for a second, and in some cases, a third time.

The downtown business district in Bladenboro has been flooded following Hurricanes Floyd, Matthew, and Florence.

There were complaints about a lack of organization among volunteers in the town.

Kaitlin Vallierie spoke out and said, “We have three people cooking at the same time. There needs to be some coordination.”

She explained instead of three people cooking breakfast, they could have divided duties; one person cook breakfast and another person focus on the evening meal.

Vallierie also said there was no communication among groups at all.

Another resident complained there were no sandbags filled and handed out prior to the storm.

Mayor Rufus Duckworth said, “The money is still tied up in Raleigh.”

Don White Jr. asked about a press release that was issued by the State, indicating Bladenboro had received $126,000 for the Bryant Swamp clean up. He inquired as to why no one from the town had called to inquire why the grant check had not been sent. Again, Mayor Duckworth said the State had not released the funds to the town.

“This is an election year, has anyone on the board made a phone call to William Brisson to see if he can get some type of emergency funds from Raleigh (for Bladenboro)?” asked White.

He also noted that he has looked at the Bladen County GIS map and there are 52 businesses located between Ash Street, Fourth Street, and Elm Street. White said of those, 75 percent were either damaged or flooded.

“I would have never guessed that,” said White.

He also noted that figure does not include the businesses located west of Robert West’s Garage.

White also asked how Boost the ‘Boro group could best help the town with clean up and recovery efforts. Duckworth told White to get a plan together and present it at the next regular board meeting.

Several residents also commented regarding their homes being flooded and asking what the town plans were to do to prevent flooding in the future.

Town Commissioner, Sarah Jane Benson, told the board that the residents and business owners who attended the meeting were seeking answers to questions, and the least the board can do is try to answer their questions.

The board remained quiet.

The board also voted to enter a closed session for personnel matters.  After reconvening in open session, the board voted to name Randy Sykes, as Interim Bladenboro Police Chief.