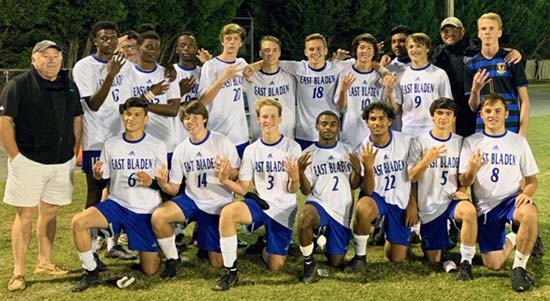 Senior Jon Von Rupp raced to the goal to bang in a header from senior Jay McGill off of a corner kick from senior Jake Evans for the first Eagle goal.

East Bladen scored again off of another Evans’ corner kick. This time the McGill header found the net for a 2-0 lead. “It was a beautiful goal and I thought it took some of the wind out of Whiteville’s sails,” said Eagle Coach Jay Raynor. “Nice ball sent in and a power header into the left corner.

“Jake was a force to be reckoned with and couldn’t be stopped,” said Raynor. “Tonight was one of his top performances. Even after some physical challenges, he kept going at them and beating their backs time and time again.”

Whiteville had a good chance to score off of a corner kick in the first half, but their shot hit the outside of the post.

“Jon had another brilliant game,” noted Raynor. “His pressure up top sets the tone. He picks up just about any loose ball in his area and is always on the loose balls in the goal mouth.”

The Eagles tacked on 2 more goals in the second half. Junior Garrett Melvin hit a rocket to beat the keeper from distance that curled into the upper 90 of the goal. “Jon laid the ball of to him and Garrett hit an unbelievable one time finish,” stated Raynor.

Senior Gabe Barber scored the final East Bladen goal off of a deep throw in their attacking one/third. “Gabe had another game in which he controlled the game,” said Raynor. “He handled their physical play and was able to put some dangerous attacks together for us. He helped us utilize the space in behind them better in the second half.”

“Our play in the second half was some of the best soccer I have seen us play,” noted Raynor. “We settled the game down and started to flow. Our chemistry and movement of the ball and off the ball was superb.”

East Bladen outshot the Wolfpack 14-2 in the first half and 18-4 in the second half. “Our backs once again were impressive,” said Raynor. “There were some dangerous challenges in the back, especially early on that they made some tough plays on. Milton (Estrada), Freddy (Wooten), and Jay McKoy handled their business in the back. They are tough to beat and they don’t quit if they do get beat.”

“Jacob Priest had 2 very good saves,” noted Raynor. “Whiteville came out fired up and was able to force us into some mistakes. Jacob made quality saves that he was forced to on shots off of 2 of those mistakes.”

Raynor also praised the play of McGill and Chase Starkloff saying, “They did phenomenal coming off the bench tonight. Jay has a knack for scoring on set pieces and showed that again tonight. Chase has grown tremendously this season and we are able to put him anywhere on the field.

“Malcolm (Bolden) and Garrett had quality games as well,” continued Raynor. “When they turn it up they are fun to watch. Some times it takes some time but once they get into the groove they are practically unstoppable.”

Raynor concluded, “The environment was electric! Our fans traveled well and were no doubt the 12th man tonight. It felt like a home game with all our fans there and we appreciate that. It was really a playoff atmosphere.”

The Eagles will host Red Springs on Monday.