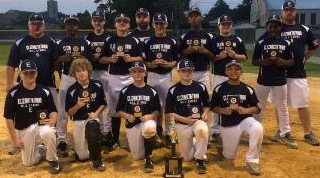 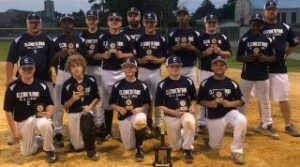 Elizabethtown took an early 1-0 lead in the top of the first inning. Jake Futrell smacked a single, Carson Gooden was hit by a pitch, and Barnes walked to load the bases. Parker Greene drilled a sacrifice fly to centerfield that scored Futrell.

West Robeson answered with 3 runs in the bottom of the first on 2 hits and 2 walks. Barnes relieved Elizabethtown starting pitcher Carson Gooden and retired the final batter in the inning.

West Robeson went back on top 4-3 with a run on 2 hits in the home half of the third inning.

Barnes slammed a double and raced home on Greene’s single to tie the game 4-4 in the fifth inning. Elizabethtown later loaded the bases, but a line drive double play helped end the threat.

Elks laced a double to centerfield to start the winning rally. Futrell walked and Gooden ripped a single that loaded the bases. Barnes walked to force home Elks with the go-ahead run.

An error on Hunter Smith’s grounder scored Futrell. Terreon Graham and Britt Sasser were both hit by pitches to force home Gooden and Barnes. Nixon’s infield hit scored Smith and stretched the lead to 9-4.

Three outstanding defensive plays by Elizabethtown in the bottom of the sixth sealed the victory.

Barnes struck out six batters, walked two and allowed only one run to pick up the victory in relief.

Both Elizabethtown and West Robeson American will advance to the State Majors Tournament in Kenansville.