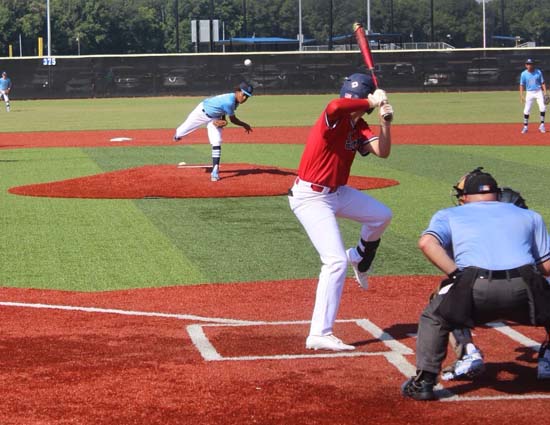 STERLINGTON, La. – The Bladen County Dixie Pre-Majors All-Star team pounded out 12 hits in a 13-3 rout against Laurel, Mississippi on Sunday afternoon inside the Sterlington Sports Complex.

With the game two win, Bladen County remains in the winner’s bracket and earns the right to play North Charleston, South Carolina on Monday at 2 p.m. ET. The game will be streamed on lspn.live.

The Fine brothers – Brandon and Dylan – led the Bladen County hitters with three each. Jacob Priest and Drew Sholar drove in a combined seven runs with their two hits apiece. Raymond Autry and Zachary Meares both had one hit each for Bladen County.

Makhi Cromartie started the game on the mound for Bladen County. He had two strikeouts and a hard ground ball scooped up by Chase Starkloff at second to close the first inning.

The home team, Bladen County, exploded for five runs in the bottom half of the inning. Dylan Fine hit a line drive to left field. After walks to Autry and Brady Hollingsworth, Jacob Priest delivered a two-run single to right-center field. Drew Sholar later drove in two of his four runs with the third hard line drive of the inning. Brandon Fine pushed the lead to 5-0, scoring Sholar to continue his hot hitting.

Laurel cut the lead to 5-1 in the second and 5-3 in the third inning off a couple of solid hits, including a bases-clearing double by Jake Parker.

Cromartie finished the first three innings and allowed three runs off four hits while walking none.

K.J. Brown pitched a scoreless fourth inning while giving up a hit and a walk, but striking out three Laurel batters.

Dylan Fine produced a flawless hit-and-run single moving Zachary Meares to third in the fourth inning. Fine moved to second and later scored on an Autry seeing-eye two-strike single to right field pushing the lead to 7-3.

Priest relieved Brown in the fifth inning after a couple of Laurel players reached base. After a pop out to Brown at third base to get the first out, Priest produced a ground ball to Meares at shortstop for the double play to end the threat. Meares stepped on second, then fired to first to end the inning.

Bladen added a run in the fifth when Alex Brisson drew a one-out walk, moved to second base on Sholar’s sacrifice bunt and scored on Brandon Fine’s single to left.

Priest worked effectively in the sixth inning, holding Laurel to no runs and finishing his two innings of work without allowing a run nor hit while walking one.

Bladen County ended the game in the bottom half of the sixth inning with the 10-run rule by cracking five hits and scoring five runs.

Meares led off the inning with an inside-out swing producing a single to right field. Dylan Fine got his third hit of the contest, moving Meares to third. Meares scored on an attempt to tag Fine on the stolen base to second. Autry and Hollingsworth reached base on a walk and hit batter, respectively, before Priest legged out an infield chopper to score Fine. Autry was tagged out trying to reach third.

Alex Brisson had previously replaced an injured Tyler Hill and drew a one-out walk before Sholar drove in Hollingsworth and Priest. Brandon Fine cracked his third base hit of the game to left field to end the game by scoring Brisson and Sholar.