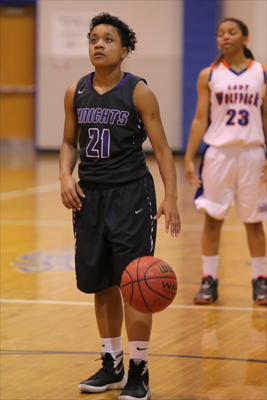 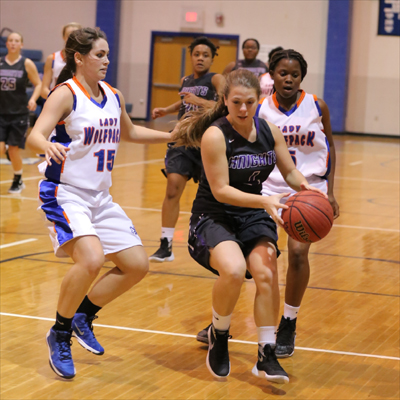 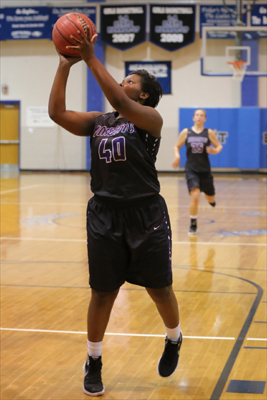 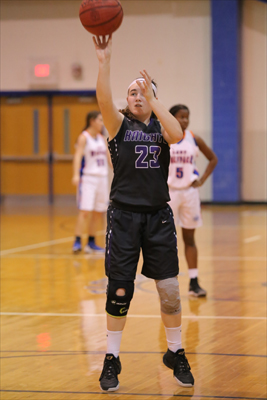 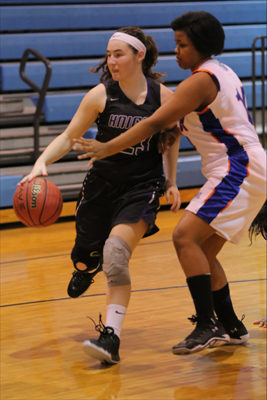 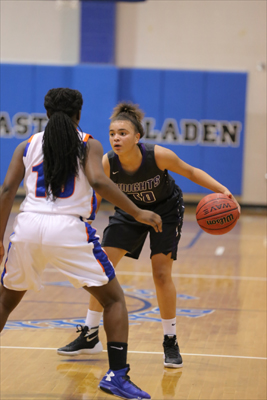 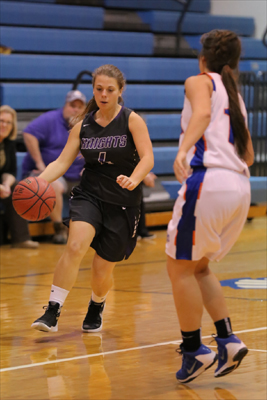 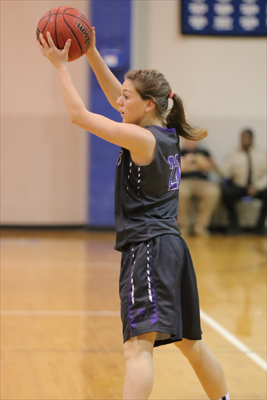 Turnovers and poor free throw shooting proved to be costly for West Bladen Tuesday night as the Lady Knights dropped a 48-38 girls basketball decision to Whiteville in the East Bladen Holiday Classic.

“We have got to protect the ball,” said West Bladen Coach Rick Rhoda. The Lady Knights were plagued by 23 turnovers in the game. At the foulline, West Bladen made only 8 of 24 attempts, while Whiteville connected on 14 of 24 foul shots.

The Lady Knights opened the game with an 8-0 run as an Alanna Ludlum pass led to a lay-up for junior Jenna Dove. Junior Logan Autry drove for a lay-up, and a Dove pass resulted in a lay-up for junior center Jerena Purdie. Autry sent a pass in to Purdie for another lay-up.

Junior Akira Grimes sank a free throw, but Whiteville’s Madison Hinson drained a 3-point shot to trim the Lady Knight lead to 9-5 at the quarter break.

Purdie powered in a rebound basket, and junior Laikyn Pait flipped in a one-hand runner to push the West lead back to 13-7. Pait knocked down a 16-footer and turned an in-bounds pass from Ludlum into a lay-up and a 17-8 lead.

Junior Kaylee Stevens put back a rebound for a 19-11 Lady Knight lead, but Hinson drilled in another 3-ball and hit 2 free throws to spark a 7-0 Whiteville run that closed the gap to 19-18 at halftime.

Ludlum stole the ball and raced for a lay-up to begin the second half, but the Lady Wolfpack responded with a 12-0 run to take a 30-21 lead.

“We’ve got to learn to play hard for 4 quarters,” said Coach Rhoda. “We have got to keep moving on offense. Sometimes we get caught standing too much.”

Grimes turned a rebound into a 3-point play, and freshman Erika McKoy drilled a 17-footer to keep West within 33-26. Two Nsaia Rogers free throws put Whiteville up 35-26 at the quarter break.

Lady Knight sophmore Patience Parker turned a steal into a lay-up, Purdie scored on a follow-shot and Autry sank 2 free throws to keep West within 41-33.

Hinson buried a 3-pointer form the top of the key with 1:28 left for a 44-33 Whiteville lead. A Parker free throw and a pair of Grimes lay-ups accounted for the final Lady Knight points.

Grimes and Purdie finished with 8 points and 6 rebounds each to lead the Lady Knights. Pait filled the stat sheet with 6 points, 7 rebounds and 6 steals. Autry totaled 4 points and 3 steals.

“We are getting there,” continued Coach Rhoda. “We have got to get used to playing man defense. We still get into zone habits at times. But I am pleased with the progress that the girls have made.”

West Bladen, now 2-6, is scheduled to play in a holiday tournament at East Columbus Monday.