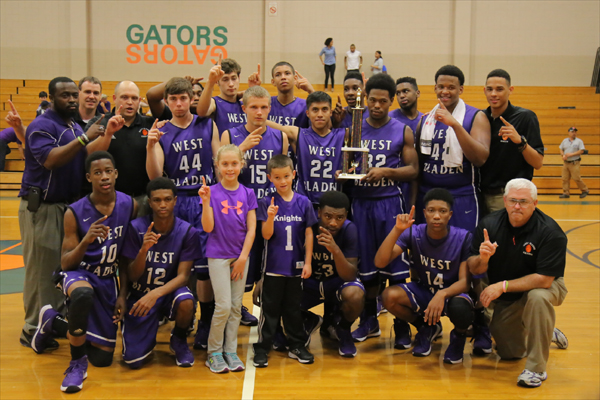 West Bladen rallied in the final 4 minutes of regulation then made the big plays in overtime to defeat South Robeson 68-61 and win the championship game of the East Columbus Christmas Tournament Tuesday night.

It was the second tournament championship in less than a week for Coach Travis Pait’s Knights who won their own Woodmen Life Tournament title last Wednesday.

The Knight comeback overshadowed an incredible performance by South Robeson senior Davonta Banks who fired in 31 points in the championship game after scoring 41 points in the Mustangs first round victory over East Columbus.

“I thought we did a decent job on him,” said Coach Pait. “But he can just flat out play.”

Banks spun to the basket for a lay-up then added 2 free throws to give the Mustangs a 53-47 lead with 4:19 left in regulation.

Junior Sayaun Dent nailed a 3-point shot from the left corner at the 3:24 mark to begin the Knight rally. After West senior Stefan McDonald stole the ball, sophmore Jonathan Robinson hit a free throw to close the gap to 53-51.

A Banks assist produced a lay-up for Dakota Clark, but the Knights answered as sophmore Jimmy Williams drove to the basket for a lay-up and a 56-55 score with 1:07 on the clock.

The Knight defense forced a traveling violation at the 38-second mark, and Dent grabbed a loose ball and was fouled with 12 ticks left. Dent tied the game with the second foul shot.

The Knights took charge in overtime as Robinson turned a Dent assist into a lay-up. Bowen canned the first of two free throws, then put back a rebound on the second one to stretch the lead to 61-56.

Dent turned a Robinson assist into a lay-up for a 63-57 lead with 52 seconds remaining. McDonald sank 2 free throws to up the count to 65-58 with 32 seconds left.

Banks bombed in a 3-ball to slice the lead to 65-61, but McDonald stole the ball and pitched ahead to Bowen for a lay-up that resulted in a 3-point play with 6 seconds on the clock.

Bowen contributed 11 points and 6 rebounds for the winners, Robinson tallied 5 points and sophmore Shaquille Johnson pulled down 5 rebounds as the Knights held a slim 38-37 edge on the boards.

“It’s good that we can win these close games,” said Coach Pait. “But we can’t count on not playing good for 28 minutes and then pulling it out at the end when we get back into our league. Our league is too strong for that.”

Pipkin and Banks delivered 3-point shots as the Mustangs jumped in front 8-0 to start the game. After Johnson banked in a 6-footer, Clark and McDonald traded 3-point baskets that kept the South lead at 11-6.

Banks dropped in a lay-up off an in-bounds play, but McDonald drove for a lay-up and a 3-point play that trimmed the margin to 13-9. Leach threw in the fourth Mustang 3-ball of the quarter that grew the lead to 16-9.

West rallied as senior Will Lambeth turned a McDonald assist into a lay-up, then drove the baseline for a reverse lay-up. A Williams free throw narrowed the gap to 17-14 at the quarter break.

Bowen flipped in a floater to begin the second period, and Robinson converted a Dent assist into a reverse lay-up. Leach and McDonald traded 3-point bombs, before McDonald stole the ball and dropped in a dunk that resulted in a 3-point play and a 24-20 Knight lead.

Senior Malique McDowell cashed in a foul shot, Bowen put back a rebound and Williams banked in a 4-footer for a 29-24 Knight lead at the half.

“We played good defense in the second quarter,” said Coach Pait. “But we got away from it again until the end of the game. We missed a bunch of lay-ups.”

Freshman Keshawn Lewis scored a lay-up in transition to pad the West lead to 31-24 to begin the third quarter. Banks and Pipkin nailed 3-pointers for South, but McDonald converted a Dent assist into a basket then drilled a 3-pointer to keep the West lead at 36-32.

Banks threw in 7 points during an 11-0 spurt that vaulted South in front 41-36. Banks slammed in a dunk off of an in-bounds pass to cap the run. McDonald and Dent drove for lay-ups to pull West within 41-40 at the quarter break.

Banks scored the first 6 Mustang points of the final period, but Dent put back a rebound and made 2 free throws for West. McDonald drilled a corner 3-ball to keep the Knights within 49-47.

“We have played five games with no practice time,” said Coach Pait. “The good news is that now we have 3 days to practice. We can get in the gym and get better.”

The Knights improved to 10-1 with the win and will host Heide Trask in a Four County Conference game Monday night.