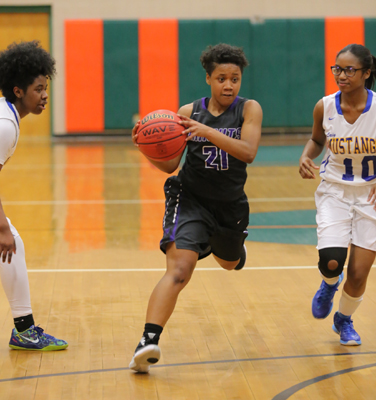 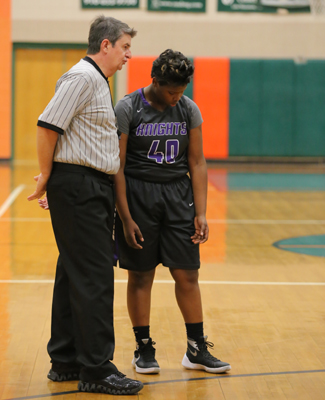 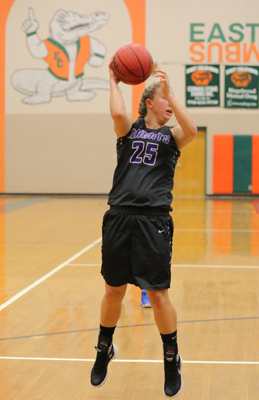 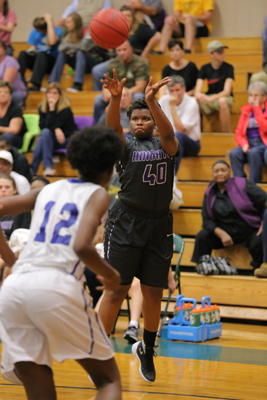 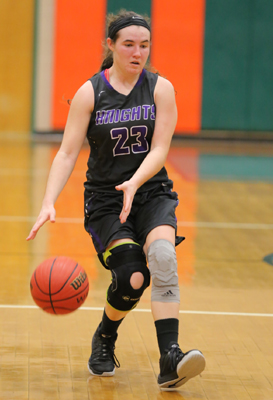 Star guard A’terria Quick poured in 26 points and South Robeson’s Lady Mustangs raced to an early 26-0 lead en route to a 51-33 girls basketball victory over West Bladen in the opening round of the East Columbus Christmas Tournament.

Quick pumped in 12 points during the early South Robeson run. Teammates Desaree Dunham and Carrington Mitchell added 6 points each to the spurt.

Sophmore Patience Parker nailed a 3-point shot with 4:16 left in the first half to break the scoring ice for the Lady Knights. Junior Logan Autry drilled a 16-footer from the left wing and rattled in a 3-point shot from the top of the key to pull West to within 28-8 at halftime.

Lady Knight freshman Erika McKoy stole the ball and sprinted for a lay-up to start the second half. McKoy knocked down a 17-foot jumper later in the period, but Quick dished two assists to Nytia Lewis for a pair of lay-ups that pushed the Lady Mustang lead at 37-13.

Juniors Akira Grimes and Alanna Ludlum bombed in 3-point shots to keep West within 42-20 at the quarter break.

Lady Knight junior Laikyn Pait stole the ball and dished an assist to Autry for a lay-up that began the final period. Pait sank 2 free throws and flipped in a one-hander from the lane to keep the margin at 48-26.

Grimes drained a 17-foot jumper and a free throw, and junior Elizabeth Allbright banked in a short shot from the lane. Junior Kassidy Anderson popped in a baseline jumper to close out the Lady Knight scoring.

“Sooner or later we are going to put four good quarters together,” said West Bladen Coach Rick Rhoda. “I thought we looked more comfortable running our offense in the second half.”

Autry led the Lady Knight scoring with 7 points. Grimes finished with 6 points, 3 rebounds and 2 steals. Pait, McKoy and Parker followed with 4 points each.

Pait grabbed a team-high 7 rebounds, and juniors Kaylee Stevens and Jerena Purdie pulled down 5 rebounds each.