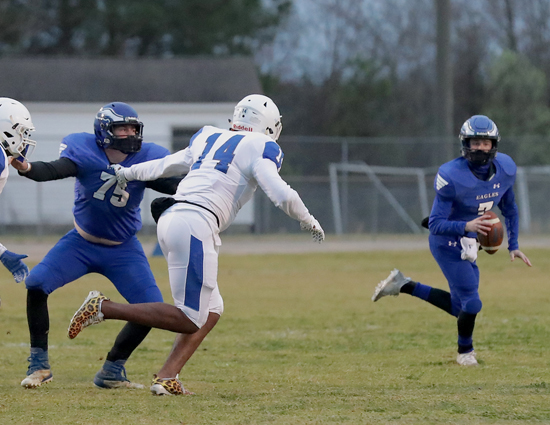 McKoy was the workhorse of the East offense rushing for 1,169 yards and 15 touchdowns, adding 127 receiving yards and 3 more TDs and returning a kickoff for a touchdown. He also sealed the victory over Whiteville with a pass interception.

Norris and Hayes anchored the offensive line that cleared the way for the Eagles to average 374 total yards and 41 points per game. Hayes was a tackling machine racking up 84 tackes from his middle linebacker position.

McDowell hauled in 5 touchdown passes from his tight end spot and had 131 receiving yards. On defense the 6-foot-6 end made 35 tackles, 3 sacks and had a leaping interception. Meares threw for 426 yards and 8 touchdowns.

Adams hauled in 11 passes for 242 yards and 4 touchdowns and also had a 94-yard kickoff return. Ethan Davis filled a key role on the Knight offensive line. Robinson rushed for 142 yards, snared 4 passes for 92 yards and a touchdown and returned a fumble 52 yards for a touchdown at West Columbus.