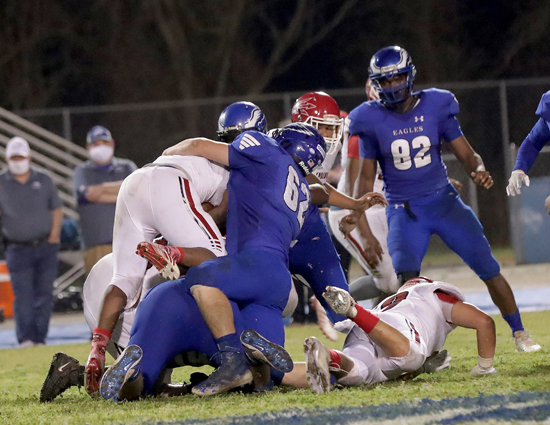 The Red Devils controlled the 1st half mounting 3 long scoring drives and holding a 42-11 edge in offensive snaps as they built a 19-6 lead. “Our offense just didn’t give our defense any time to rest,” said Eagle Coach Robby Priest. “Even the touchdown came on a one play drive.”

Red Devil Chris Bryant recovered an onside kick to begin the game at the East 42 yardline. Red Springs covered that distance in 8 plays with quarterback Jeffrey Locklear connecting with Bryant on a 20-yard touchdown pass. Oscar Salgado kicked the extra point for a 7-0 lead at the 7:50 mark.

East Bladen’s Raymond Autry, Jr returned the kickoff 28 yards to the Red Springs 46 yardline, but the Eagles were stopped on downs at the 37.

The Red Devils responded with a grueling 63-yard drive in 20 plays. Six times Red Springs converted 3rd down situations. Jeffrey Locklear picked up 1st downs with a 15-yard pass to Shawn Putman and a 10-yard pass to Eddrick James before diving into the end zone from a yard out to push the Red Springs lead to 13-0.

After a failed onside kick attempt gave the Eagles possession at the Red Devil 44, junior Javius Brooks burst through the line and raced 44 yards for an Eagle touchdown that sliced the lead to 13-6 with 7:44 left in the half.

Back came the Red Devils with a 10-play 55-yard drive that featured the running of James and Angel Washington who combined to gain 49 yards on the march. Washington carried 5 yards for the touchdown and a 19-6 lead 2:44 before halftime.

Senior Jake Garrison’s 7-yard return of another Red Devil onside kick gave the Eagles the ball at their own 49. A 9-yard pass from senior Zach Meares to senior Javant McDowell gained a 1st down for East Bladen at the Red Devil 37, but the Red Devil defense stiffened and ended the threat on downs.

On their initial possession of the 2nd half, the Eagles embarked on an 85-yard drive that consumed 17 plays. Junior Tim McLean bolted 17 yards for a 1st down, and Javius Brooks picked up 1st downs with runs of 7, 6 and 7 yards.

His little brother, freshman Masion Brooks, converted a 3rd down situation with a 5-yard gain before junior Nazire Smith made a diving catch of a Meares 4th down pass for a 7-yard touchdown with 2:02 left in the quarter. Meares scampered around right end for the 2-point conversion that narrowed the gap to 19-14.

An unsportsmanlike conduct penalty on 3rd down against the Eagles kept the next Red Springs possession alive. Jeffrey Locklear connected with Bryant again on a 15-yard touchdown pass. James ran the conversion to push the margin to 27-14 with 11:14 remaining.

Autry dashed 35 yards on the kickoff return to give the Eagles the ball at their own 40. A defensive holding penalty kept the drive alive, and senior Rasean McKoy banged through the line for 12 yards, but the drive stalled at the Red Devil 24 yardline.

The Red Devils held a 235-166 edge in rushing yards and a 297-182 advantage in total yards. “ We are just not mentally tough in game-changing situations,” said Coach Priest.

The Eagles, now 2-2, will travel to West Columbus Thursday for a 7 p.m. game.