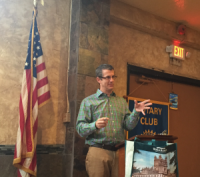 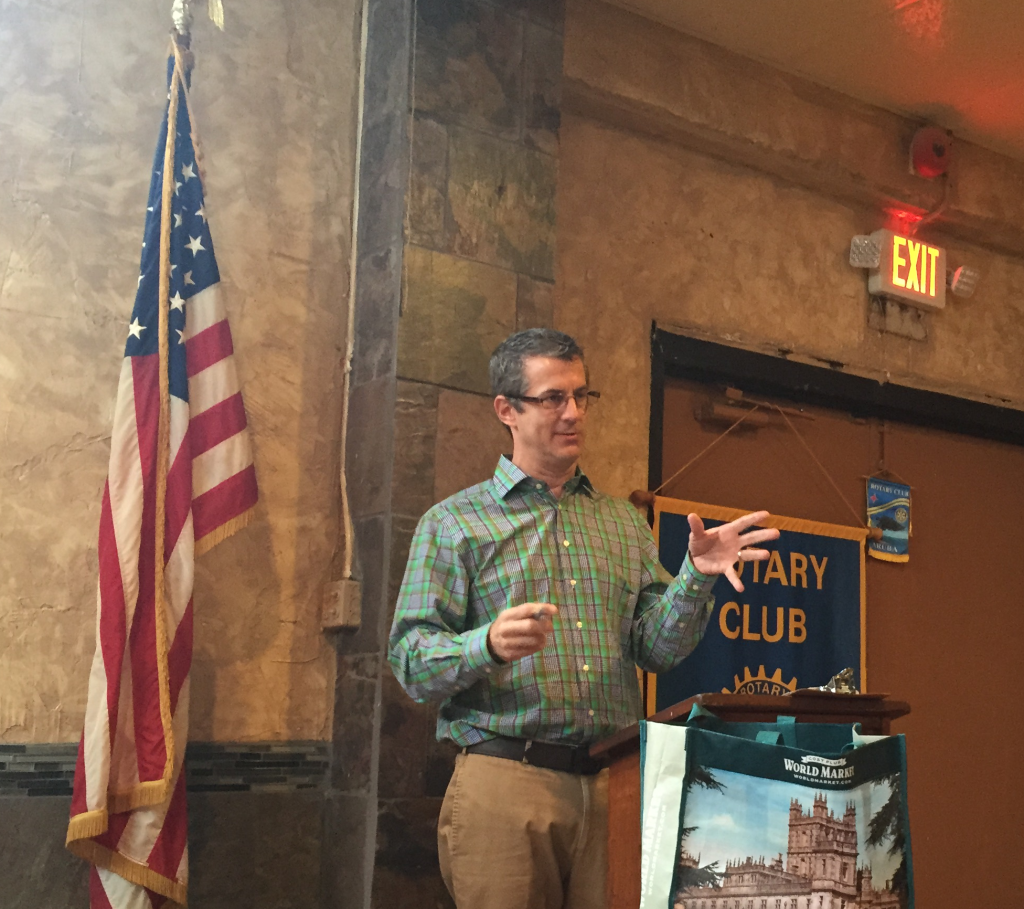 John’s questions were not easy, but very interesting. Everyone in the club learned something new before leaving the lunch meeting.

One question John asked was, “In all my years with WWAY, what was my favorite high school basketball rivalry to cover?”  After many wrong guesses, the correct answer was Tar Heel verses Bladenboro. Coach Cross, was head coach over Tar Heel, and Junior Nance was the head coach of Bladenboro.

John recalled, “You would stand in line an hour or two to get in because it was two tiny gyms. It was two extremely well coached basketball teams and two great teams. You knew it was going to be a good game. Unfortunately, we won’t be seeing them play basketball anymore, or at least not anytime soon.”

Another question the crowd received was, “What current coach in Bladen County lives, breaths, and sleeps the Pittsburgh Steelers?” Rotarian Renee Horton answered, “Coach Patty Evers.” WWAY show cased the East Bladen Softball team Tuesday night because it was the first time they had ever won a game against Pender.

John continued, “What two Bladen County journalists have always gone out of their way to help me with my coverage of Bladen County as far as information and statistics?” The answer was dedicated journalists, Buddy Burney and John Clark.

“What did former basketball Coach Ken Cross do for a brief time to help football Coach Raymond Marlowe?” John asked close to the end of the presentation. The answer was, Coach Cross would help Coach Marlowe by videotaping Marlowe’s games so Marlowe could go back and watch the games over the weekends.

John’s last question, “What TV station should you rely on for your coverage? Answer: WWAY

Some more interesting answers that came from John’s questions were:

Former Bladen County student, football and baseball stand out, Tyrell Godwin was from Wilmington. Godwin was a stand-out, two sport athlete. He was coached by Russell Priest and ranked among the top 50 prep players in the nation as a high school senior and was a two time prep All-American in baseball.

John first met Desmond Bryant, currently a NFL player for Cleveland Brown, five years ago when Bryant was speaking to the students at East Arcadia.

Shortly after Coach Lennon Fisher retired, he had a hard time watching his former players play, so he would watch the games from his truck with his windows rolled down. Coach Fisher now has a dealership, Coach’s, on 701 in between Elizabethtown and White Lake. Fisher also still sports Bladen County sports.

Former NBA Player, Chuckie Brown drove John to a game in Elizabethown when East Bladen High School was playing North Brunswick.  Brown is from just outside of Leland, NC.

Robbie Priest was the last high school football coach to let John in the locker room to hear his pre-game speech.

John told the club he has been covering Bladen County since 1989. When he wasn’t in Wilmington, he was reporting from Fayetteville and was always reporting on Bladen County.