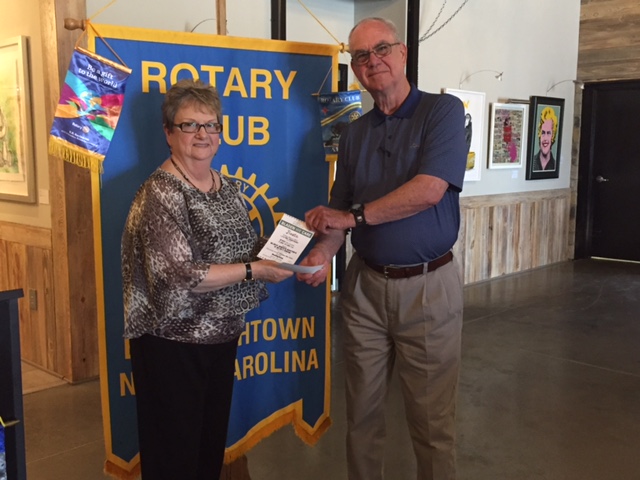 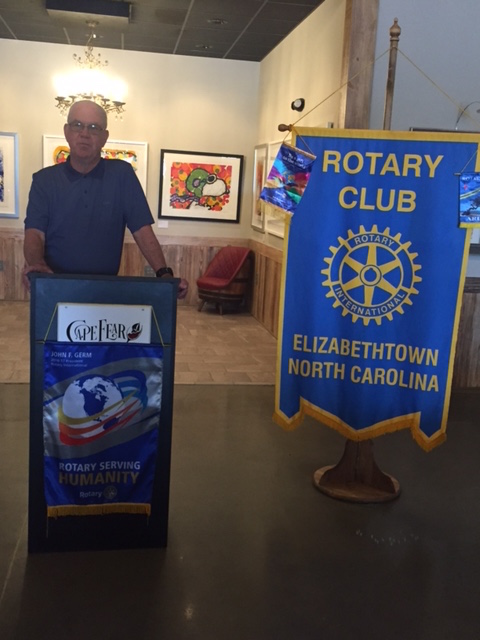 Mac Campbell, of Bladen We Care, spoke to the Elizabethtown Rotary Club on Wednesday during their luncheon meeting at Cape Fear Vineyard and Winery. He said Bladen We Care is celebrating its 28th year of helping people in Bladen County through grants they make to those in need. Two very important upcoming dates for Bladen We Care are the Golf Tournament schedule for April 27, at Vineyard Golf at White Lake and the Bladen We Care Gala scheduled for May 5 at Lu Mil Vineyard. Rotarian Linda Burney purchased the first ticket for the gala.

“We are all volunteer. There is no paid personnel,” said Campbell.

He said all of the funds raised through its two main fund raisers remain in Bladen County to help Bladen County residents who are in need. Campbell said the golf tourney was begun in March 1989 when a friend was diagnosed with terminal cancer. Campbell said several individuals got together and decided they wanted to try and help their friend. Campbell said their friend was in financial need due to his health care situation. He said the group discussed different ways in which they could help and they decided to start a golf tournament which turned out to be very successful.

Campbell said they next decided to team up with a hospice organization with the understanding the funds were to assist Bladen County residents. He said after a couple of years the partnership did not work out. Campbell said that was when it was decided to create their own organization and Bladen We Care was created.

He said the main goal is to assist those Bladen County residents who have fallen through the cracks or those who have to wait several months to receive any type of assistance.  Anne Nye receives referrals and there is a checklist of criteria a person must meet.  Campbell said the committee will then meet and review the applications and make determinations regarding the grant.

Campbell said a need could be someone who is the leaving the emergency room at the hospital or someone who has been hospitalized and they don’t have any means to pay for their medicines. He said Bladen We Care does not pay for pain medications.

Campbell said Bladen We Care has also assisted with things other than medicines. For example, the group assisted a women with having a telephone line installed for a terminally ill woman who had no way to stay in contact with her nurse.

The group has also helped endow a teaching position and endowed a scholarship at Bladen Community College.