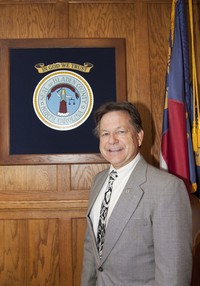 After several calls from our citizens in Bladen County, I decided to respond to your article. It was an honor and a pleasure to serve on the Bladen County Board of Elections for 15 years.I was asked by Mr. Billy Ray Pait to switch from a democrat to a republican, so I could replace my friend the late Dicky Glenn on the board of elections so that he could run for City Council of Elizabethtown.

I did so because it was a non-partisan position. I asked my wife 3 days later had she noticed a change in me, and she asked, “What are you speaking about?” I laughed and said I changed parties, so I’m supposed to be different now. I am proud to say I don’t get caught up in the party issue, and I have never asked
anyone what party they were. It was a pleasure to serve under the director of board of elections, Mr. Larry Hammond, who was considered to one of the top in the state. His integrity is second to none. He is a retired officer of the Coast Guard, marching delegate representing all Coast Guard in the inaugural parade for the President of The United States in Washington D.C., and the Long Leaf Pine recipient of Governor Pat McCory. I served with Mr. Bobby Ludlum (retired military) and the late Mrs. Robinson on the Board of Elections. It was an honor to be picked as Chairman by the opposite party.

Now in reference to your speaking about Dr. Mark Harris and Mr. Macrae Dowless I have a few things to say. I did not know Mr. Dowless until I went on the Board Of Elections even though a former board member, Mr. Gen Lutz, told the state that I was his cousin. Maybe Mr. Lutz can tell you if I am his 10th, 12th or 14th cousin. When I first went on the board, there was an accusation about Mr. Dowless and Mr. Levi Roberts. It was investigated by Mr. Mashall Tudor with the State Board Of Elections. It was reported to the director and myself that there was no wrongdoing with either party.

Now here is what is important, we had numerous violations and concerns, and we addressed those to the state over the next several years, but I can assure you they were not about Mr. Dowless!

This was very troublesome because the citizens of this county looked to us for answers, and we could
not get the help we needed from the state. When what happened to Dr. Harris in 2018, I was very upset because I knew we had all worked hard and he won the election and was certified in every county. Then the big word came on the National news, Macrae Dowless harvesting of ballots in Bladen County! I ask each and every one of you to view what the clip below of Ms. Kim Strach, the former director for the North Carolina Board of Elections, stated at Davidson College,”After further review and research there was no harvesting of ballots.”

These are just some of the reasons I chose to stand up for the integrity of Bladen County the way it was tainted Nationally and locally. This wasn’t about Mr. Dowless to me. Put any name you wish to the same situation, and I would have done the same thing. That is why when Mr. Pat Melvin contacted me about putting the bail up for Mr. Dowless, would I go get him out. I did not hesitate. I did it then, and I would do it again because it was the right thing to do. The media always seems to bring up Mr. Dowless’ or anyone else’s past. I am sure glad we serve a forgiving God because man can be a beast. I heard Dan Forest recently at The Lake Church say upon giving his testimony, “I’m not going to stand up here and tell you about my past because I sure don’t want to know yours”.

I am a member of Optimist International, and in our creed it states “to forget the mistakes of the past and press on to the greater achievements of the future. To give so much time to the improvement of yourself that you have no time to criticize others.”

Now let’s talk about Mark Harris. I tell people that Billy Graham could always drive the car but Dr. Mark Harris could sit in the front seat with him. For Dr. Harris to write the article that he did and commend me for the action that I took to defend the county that I am now a county commissioner in is very humbling to me especially when the media and the alleged charge to Mr. Dowless supposedly lost Dr. Harris the election.
Now let’s talk about the current election. You indicated that you hope people vote for Mr. Gooden, Mark Gillespie, and Michael Cogdell instead of me. I feel people are voting for Mr. Gooden and Mr. Gillespie, and I look forward to working with both of them. It has been an honor in the four years that I have been a commissioner I have been the chair twice and the vice-chair once, and the third year I asked that I not be considered for either due to two losses in my family. My family needed a little more of my time. I am grateful to the ones that have voted for me and to the ones that will but if I were not to win a seat it would be answered prayer to my wife. This  is a thankless job but one that I take very seriously and feel that it is an honor. I represent the county commissioners on the Board of Trustees at the college and Bladen’s Bloomin Board and serve on the board to help revitalize the town of Bladenboro, and we will see this through.