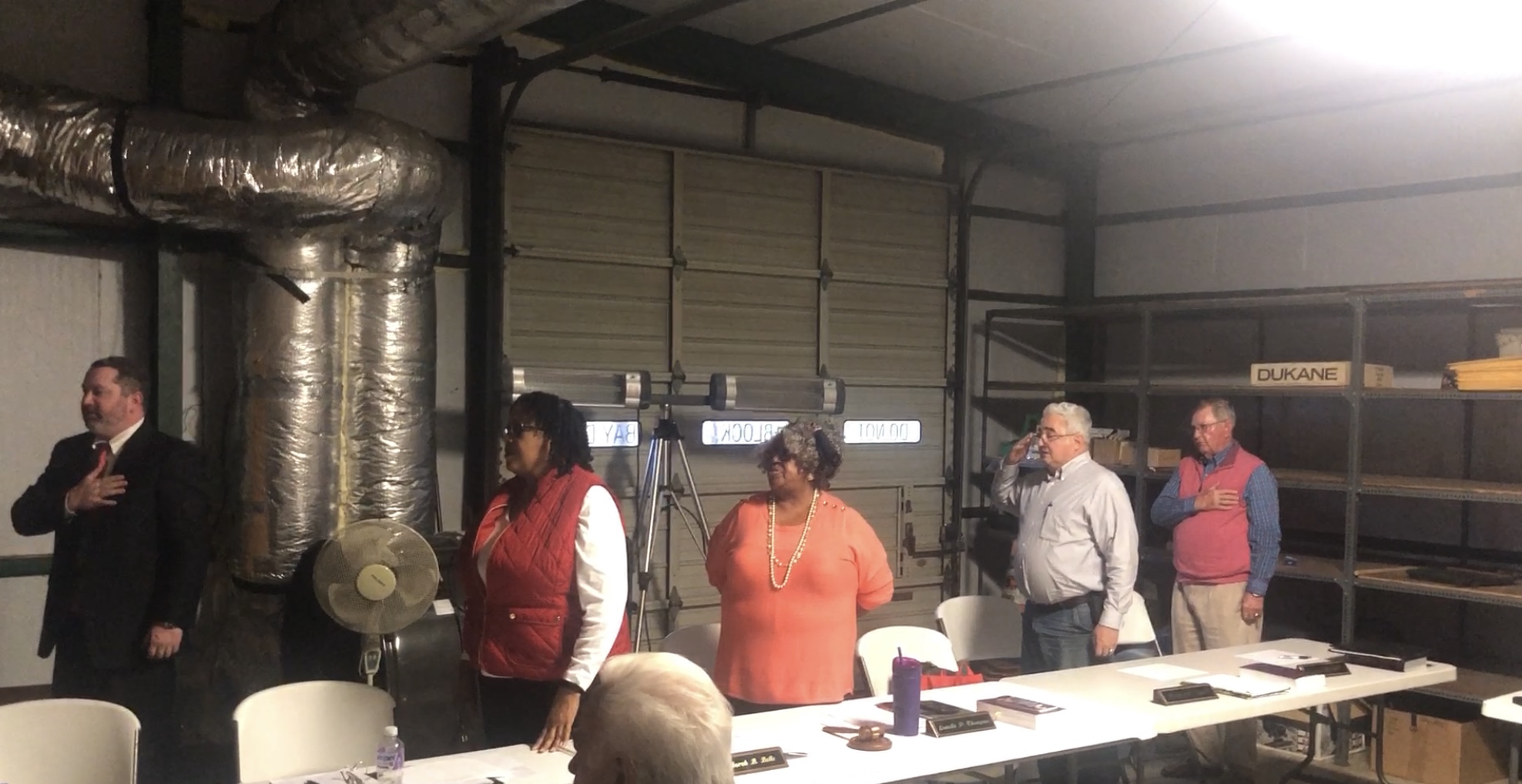 The meeting room of the Bladen County Board of Elections was at capacity with 49 people in attendance with more waiting outside for the regularly scheduled board meeting. Bladen County Director of Emergency Services, Nathan Dowless managed the crowd on Tuesday evening at 301 S. Cypress Street in Elizabethtown.

A decorated Vietnam Veteran from Sanford, N.C., by the name of Mark, said he made the two hour trip to stand and recite the Pledge of Allegiance, and possibly get arrested. He was referring to the last board of elections meeting where Chairperson Louella P. Thompson threatened arrests if the Pledge of Allegiance was said again in the meeting like it was on the January 14, 2020 meeting.

He said, “I am a Democrat and I fought for the right to protest. I came with my grandson and bail money.”

While he said he supported the board’s right to sit during the pledge, he also supported the right for people to stand and say the Pledge.

A couple of days after the January 14th meeting Chairperson Louella P. Thompson stated the Pledge of Allegiance would be added to the agenda for the Bladen County Board of Elections’ meetings starting in February. However, that was not the case during at the February meeting.

Before the meeting started Chairman Thompson stood with the full board in attendance she announced a time would be given before the meeting for anyone who would like to pray and recite the Pledge of Allegiance.

Then a prayer was said and the Pledge of Allegiance was recited. Chairperson Louella P. Thompson, and board members Patsy Sheppard, and Deborah Belle voted against the Pledge of Allegiance being added to the agenda at the meeting during the January meeting. While the pledge was recited by the public in attendance Thompson and Belle stood, but did not salute and pledge and Sheppard left the room prior to the announcement.

After the prayer and Pledge Chairperson Thompson called the meeting to order with no agenda given to the public. Belle reported the need for reviewing 11 absentee ballots. Nine of the 11 were accepted and the other two were “spoiled” due to no signatures on the ballots. The two voters who submitted the spoiled ballots may submit another ballot.

After Chris Williams, Director of the Board of Elections gave a report about upcoming elections the 12 minute official meeting was adjourned.

After the meeting, Chairperson Thompson said, “There is no agenda, Mrs. Smith,” after she was asked why the Pledge of Allegiance was not added to the agenda for the Bladen County Board of Elections meetings starting in February.

View the video of the meeting now: