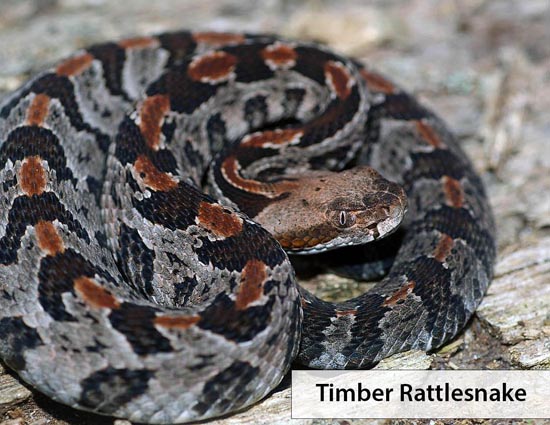 RALEIGH – The warm weather means more snakes will start to show up along trails, in the woods, crossing roads and in our yards. Wildlife diversity biologists at the N.C. Wildlife Resources Commission request that if you see a snake, do not be alarmed, do not kill it, give it plenty of room, and if you see a pine snake or rattlesnake, report it.

About 70% of snake bites occur when people try to kill or handle them. Some may become aggressive if agitated by a human or animal, but most will leave people alone if they aren’t bothered and are provided an escape route. Watching for snakes and giving them a wide berth is an effective habit for preventing snake bites. 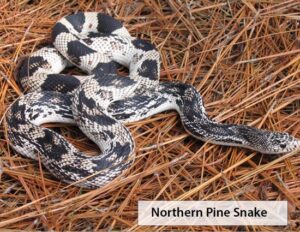 “You can gently spray a snake with a garden hose to safely encourage it to leave your yard,” suggested Jeff Hall, a biologist with the Wildlife Commission. “You can also make your yard less hospitable for snakes by cleaning up clutter such as stick and rock piles, keeping your lawn mowed, closing gaps and holes in your siding and foundation, and sealing openings under doors, windows and around waterpipes. There are many ways we can coexist with snakes.”

Snakes are an important part of the ecosystem and help control the rodent, slug and insect populations. Unfortunately, some of the state’s 38 native snake species are in decline and are listed as threatened in North Carolina.

One example of a native threatened snake species is the northern pine snake. Agency biologists want to know more about the distribution of the pine snake and are asking the public to report sightings. It is non-venomous and ranges between 4 and 5 feet long, but can get as large as 7 ½ feet. It has a white or tan background color with dark brown or black markings that begin as solid coloring or messy blotches near the head before gradually becoming distinct saddle-like blotches toward the tail. It’s mostly found in the Sandhills and the southern Coastal Plain, although there are confirmed reports of pine snakes in Cherokee and Swain counties. They prefer open areas within pine-oak forests with well-drained, sandy soil. 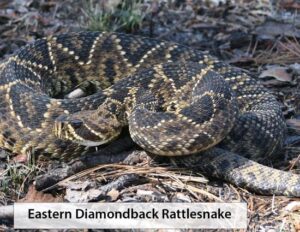 “We have partnered with the Eastern Band of Cherokee Indians to conduct surveys in the areas where pine snakes have either been seen or areas with potentially good habitat,” stated Gabrielle Graeter, conservation biologist with the Wildlife Commission. “It’s difficult to conserve a species when we don’t even know all the places it occurs. Assistance from citizens in recording and documenting the pine snake will be a huge help. Websites like HerpsofNC.org are great for helping people to identify snake species.”

People who see a pine snake in the wild are asked to send an email to pinesnake@ncwildlife.org with a photo (required), date and time the snake was observed and location (GPS coordinates preferred). The public can also download the HerpMapper mobile app and document their observations electronically. The agency partners with the app to track amphibian and reptile species. 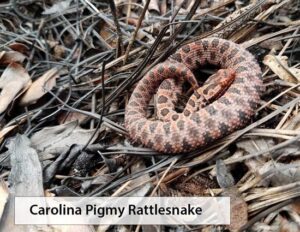 Of the six venomous snake species native to N.C., three are rattlesnakes – the timber, the pigmy and the Eastern diamondback. Each one is in decline and protected by the North Carolina Endangered Species Act. Persecution by humans and habitat destruction are the main culprits. If anyone spots a rattler, they are urged to send an email to rattlesnake@ncwildlife.org with a photo (required), date and time the snake was observed and location (GPS coordinates preferred), or they can log their sighting on the HerpMapper mobile app.

Questions about human-wildlife interactions can be directed to the agency’s NC Wildlife Helpline, Monday through Friday, 8 a.m. – 4 p.m., at 866-318-2401 or by email anytime at HWI@ncwildlife.org.