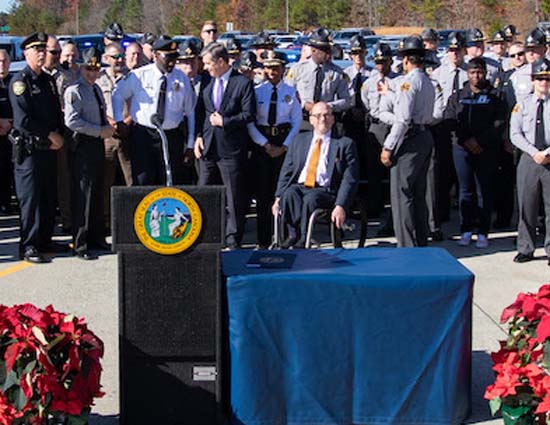 MEBANE – A statewide ‘Click it or Ticket’ campaign to raise awareness of the dangers of being unbelted in a vehicle got underway at the westbound weigh station in Mebane with the support of Governor Roy Cooper and a host of elected officials from across the state.

“1,445 people, that’s how many souls were lost on North Carolina roadways in 2018,” said Gov. Cooper in front of a crowd of first responders, fire fighters, law enforcement and elected officials.

Orange County Sheriff Charles Blackwood addressed the crowd of about 200 people who gathered at the weigh station to help encourage North Carolinians to buckle up.

“Here in Orange County, on average we have 13 crash related fatalities annually. In 2018, there were nine lives lost on our roadways. We not only need drivers to buckle up, but we need them to make certain that every person riding is buckled. Our slogan is every seat, every time! During this campaign, if we see you without a seatbelt, you will be ticketed with the goal of saving your life or the life of someone else. Please buckle up,” said Sheriff Blackwood.

The data reveals that most drivers buckle up, but more work needs to be done so that no lives are lost in this manner.

“Many crashes are preventable, and many of lives claimed could be saved with a two-second action that can save the driver, passengers or individuals in other vehicles,” said Gov. Cooper.

During The ‘Click It Or Ticket’ campaign, law enforcement agencies from across North Carolina will be patrolling NC roads to enforce our primary seat belt law. Those issued a citation are subject to a fine and court costs totaling $179. The campaign is also is about educating the public about the risks posed when occupants do not buckle.

• Unbelted occupants are nearly two times as likely to die in a collision than those wearing their seat belts.

• Unbelted backseat riders become human torpedoes in a collision and a threat to the safety of front seat occupants, even if they are using their seat belts.

• When crashes happen 52 percent of unbelted backseat riders are killed.

• Law enforcement is a key part of preventing roadway deaths.

“Starting Monday, November 25 through Sunday December 1, members of law enforcement from across the state, in every county, city, town, village and community will be working to identify unbuckled, drivers, passengers and the most vulnerable members of our state, our children,” said Colonel McNeill.

Enforcement, McNeil said, is critical, but personal responsibility is even more important. He introduced Brian Jones, a Johnston County resident and highway patrolman whose life was saved by wearing his seatbelt.

“On April 14, 2018 I was traveling on N.C. 222 in Johnston County, when I was hit by a reckless driver and my vehicle overturned. As my vehicle came to rest, I was suspended upside down, still secured in my seatbelt. Because I made the right decision to fasten my seatbelt, I am here today speaking to you on the importance of buckling up. Please, buckle up in every seat every time. Click it or Ticket,” said Jones.

The safety campaign was organized by the Governor’s Highway Safety Program, which promotes highway safety awareness through grants and safe driving initiatives like: Click It or Ticket, BikeSafe NC, Watch For Me NC, Speed a Little. Lose a Lot, and North Carolina’s Vision Zero initiative.

Mark Ezzell, the Director of NCGHSP gave a call to action.

“I’d like to ask each of you to take a moment to use your greatest tool in preventing roadway deaths, your influence! We’ve learned that a key component is not just performing these duties but leading by example. Please take a picture of yourself, parked, with your seatbelt on in whatever vehicle you traveled to get here today. Share your picture on social media with the hashtag #ClickItOrTicket ,” Ezzell said.