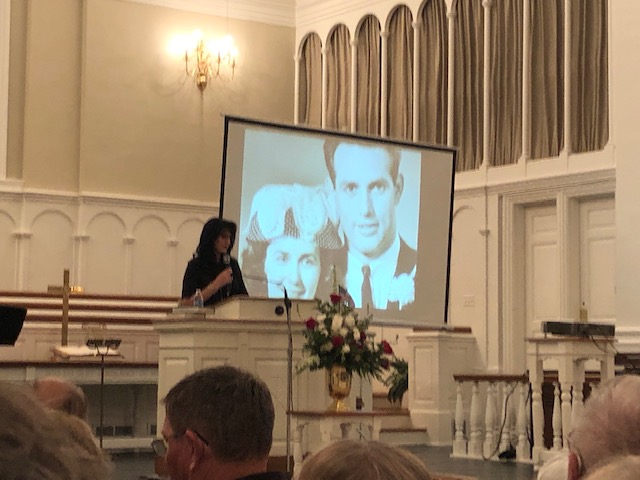 The devil in church exposed

A horrific true story about a powerful, political man torturing a Pastor and his family for five years was unfolded at Elizabethtown Baptist Church on Sunday, November 11. Rebecca Alonzo, author of “The Devil in Pew Number Seven,” described her early life’s events with remarkable poise and forgiveness. 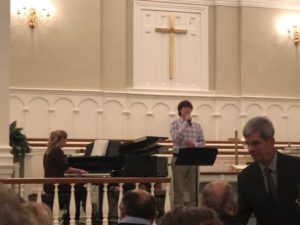 The evening contained music by Jackson Bostic, Bridget Robinson, and Kay Martin and a tragic, but uplifting testimony. The event was hosted by the Bladen Baptist Association. The book Alonzo wrote documents her family being tormented with harassing phone calls, gun fire, bomb explosions, and in the end her parents being shot. After about five years of terror, according to the book, her mom was shot dead, her dad deeply wounded as she and her younger brother watched in horror under a table in their home.

Before Alonzo proceeded with her narrative she addressed the audience by first recognizing, even though the tragic story happened in the 1970’s, some people in attendance may be related to or at least be familiar with the people in her book and in her testimony.

She said, “I want everyone to understand I’m here in love and forgiveness.”

After her announcement, Alonzo explained her mom, Romona Welch Nichols and her dad, Robert Nichols, were evangelist going all over spreading the gospel. She said her mom wanted to settle down and her dad found a church to serve as a pastor in Sellerstown, North Carolina, which is in Columbus County.

When Pastor Nichols started ministering to the church in the small township in Columbus County there were only 12 people who attended and within a year the church grew to 100 in attendance according to Alonzo. She explained everyone seemed happy with her dad, except for Horry Watts, a Columbus County Commissioner and powerful man in the area.

After the preacher fired Watts’ wife as secretary for misappropriation of funds and removed her as a Sunday School teacher the harassment began from Watts and only increased as the years went on.

Watts sat in pew number seven every Sunday. He was a wealthy county commissioner and would lend money to farmers, Alonzo explained. He threatened her father saying, “You will leave Sellerstown… dead or alive.” 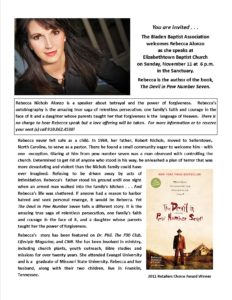 Her father’s response to Watts’ threats were, “When the Lord wants me to leave this church he will not send a message from the devil.”

Watts harassed the family and hired men to slash tires, cut telephone wires, set off bombs and other heinous acts. Drive by shootings were something the family also had to endure when Alonzo was 4 years old.

There were ten dynamite explosions around the church and the family home. Local, state and federal law agencies were investigating the acts for years. While all this was happening Alonzo said, “We would pray for Mr. Watts.”

She added, “Our dad was not afraid. He was born on Veterans Day. He was a Navy Veteran and he said he had never met anyone he couldn’t whip.”

Watts was relentless. He offered a man 100,000 dollars to run over her dad, and after five years one of Watts plans to hurt their family unfolded.

Alonzo explained what happened Easter, back in 1978, “My mom’s best friend, Sue, had an alcoholic husband, Mr. Williams, so she let her friend and her friend’s baby move in with us.”

After Mr. Williams spoke with Mr. Watts and was drunk and on pain medicines he came to her families home with three guns and plenty of ammo. Alonzo was seven and her brother was three.

“A single bullet sent mom to heaven. Dad was shot,” Alonzo said. She and her brother watched the whole violent episode from under their kitchen table.

After she explained the events she quoted, John 15:12-13, “Jesus says, This is my commandment. Love each other in the same way I have loved you. There is no greater love than to lay down one’s life for one’s friend.”

The Pastor survived the shooting and moved his son and daughter to Mobile Alabama a few months after the shooting.

Both Mr. Williams and Mr. Watts were tried in separate cases for different charges and were sentence to prison for their crimes. Both men were released early.

Her dad at age of 47 passed away from blood clot. Which left she and her brother Daniel orphans. Their aunt adopted them at the age of 16 and 11 and never let them feel sorry for themselves according to Alonzo.

After her dad died Alonzo said she was mad at God, but she realized, “I needed God more than I needed to be mad at him.“

She continued, “I made a choice to forgive and now I can allow the truth to come in and let God’s will work in my life.”

“Aunt Dot helped teach us we all need forgiveness,” Alonzo said, “pray and bless those that hurt you.”

Mr. Watts served one year in prison but during that one year he found Jesus, Alonzo testified.

Alonzo said they were able to forgive, “because my mom and dad taught us who the real enemy is.” She then quoted scripture from Ephesians 6: 11 through 13.

During the Dr. Phil show the Alonzo and her brother gave Mr. Williams a bible study with his name engraved on it.

You may find Alonzo’s book, “Devil in Pew Number Seven” on Amazon.