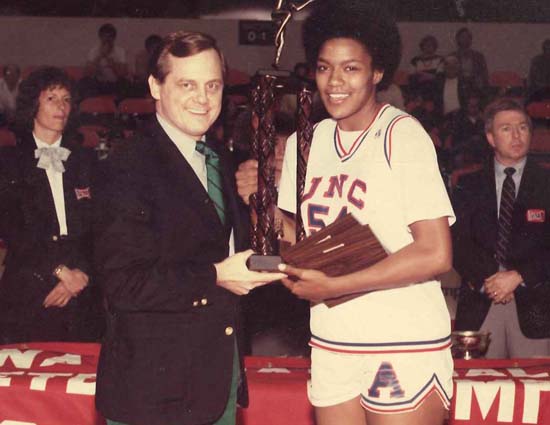 UNC Asheville also recognized the 35th anniversary of the 1983-84 team that won the NAIA Women’s Basketball National Championship at the end of the third quarter.

“I am deeply honored and elated about having my jersey retired,” Ford Duncan said. “It has been 35 years since I played basketball at UNC Asheville in the Justice Center; I am truly blessed. Thank you for remembering me after all these years.”

Duncan is UNC Asheville’s all-time leader in scoring (2,443) and rebounds (2,200). She also holds 18 other individual records at UNC Asheville. During her junior season, Duncan led the nation with 20 rebounds and 19.6 points per game.

“Sheila Ford was a strong steady leader throughout her years on the UNC Asheville team,” former UNC Asheville women’s basketball head coach (1980-84) Helen Carroll said. “Her work ethic was inspiring to all team members and her teammates joined her level of commitment toward excellence. This is what national championship teams are made of. What an honor to coach such an athlete and remain steadfast friends to this really great person.”