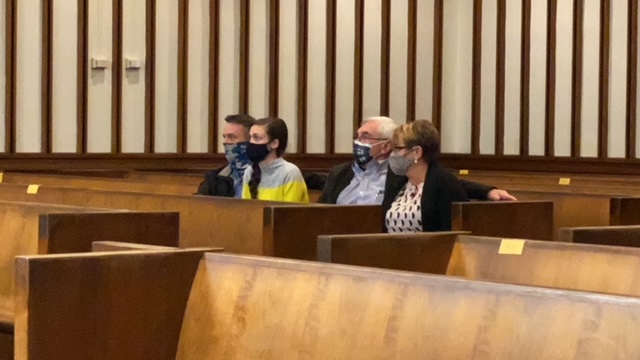 Allen Family Feels Punished Due to Politics in Bladen County

The Bladen County Board of Commissioners took a public hearing about honoring a fallen Firefighter off the agenda last night and heard passionate pleas from the late exemplar’s mom and White Lake Fire Chief, Dale Brennan.

Commissioners Arthur A. Bullock, Michael Cogdell, and Ophelia Munn-Goins joined the board meeting by video chat via telephone.

Commissioner Peterson, chairman of the board, appeared to struggle through his announcement about the agenda item. He stated, “I want to apologize to Lieutenant Ron Allen’s family for what I regretfully have to do. I am asking that we remove from our agenda the public hearing for comments regarding bridge naming in honor of Lieutenant Ron Allen.” 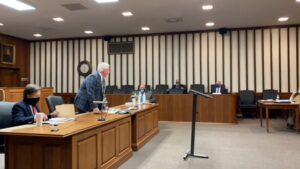 He explained, “The resolution would have requested the bridges spanning Reedy Meadow Swamp located on NC 87, north of Dublin, to be named in the memory of the late Tar Heel Volunteer Firefighter, Lieutenant Ronald “Ron” P. Allen, Jr.”

He continued, “On September 22, 2006, Lt. Allen was killed in the line of duty. According to reports, Lt. Allen had a brush truck blocking the lane he was in while he marked fire hydrant locations. Lt. Allen placed the brush truck in the lane he was working in, with its hazard lights flashing, as a safety precaution. Lt. Allen took other safety measures that day as well. However, he was pronounced dead after a vehicle hit the brush truck pinning Lt. Allen under the truck. Volunteering his time as a Certified Firefighter was not his only role. He was a beloved son, husband, father, and dedicated community member and Corrections Officer.”

In closing, Commissioner Peterson said, “The DOT (Department of Transportation) requires that the vote be unanimous. At this time, we do not have all commissioners that are willing to support this tribute to a citizen who gave his life for this county.

The family asked me to remove it from the agenda until after the Commissioners can come to an agreement. The family wants it done but not with all the political controversy.”

After Commissioner Britt and Commissioner Gillespie made a motion to take the public hearing about the resolution in support of naming the bridge after Lieutenant Ronald “Ron” P. Allen, Jr.” off the agenda, there was much discussion.

Commissioner Britt said, “I made the motion, but I would like it to be known to this family, people in the county, and every Firefighter and anyone else that serves the people of this county. I support it, would have supported, and still will.” 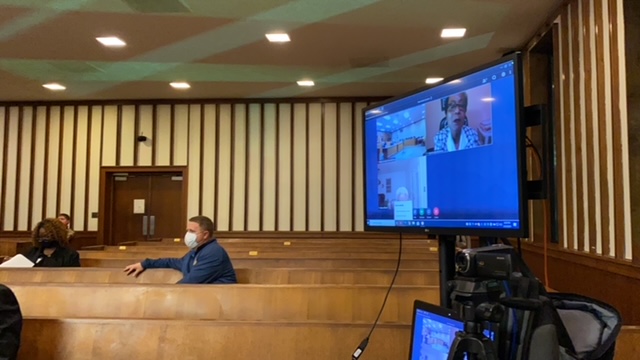 Commissioner McGill recalled when Ron passed away and apologized that all the commissioners were not present in-person to look the family in the eye.

“Dying doing something for the county and then not being recognized is pretty despicable, especially when we are using politics… The man deserves to be recognized,” Commissioner Ellis stated. 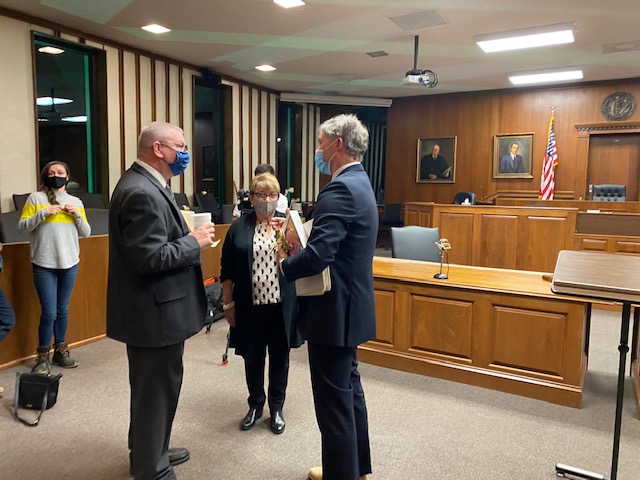 He then turned to the three commissioners on video chat and stated, “If it were your family member, you would recognize him! Sometimes you have to take politics and put it to the side and let it be for another day.”

All commissioners voted to take the item off the meeting’s agenda except for Commissioner McGill.

The commissioners heard from the public after the vote. First to speak to the board was White Lake Fire Chief Dale Brennan. He said, “Ron died trying to make the Tar Heel community a better place. What he was doing was something that the county employee should have been doing, and he got killed, and it’s a shame that the county commissioners don’t want to honor that.” 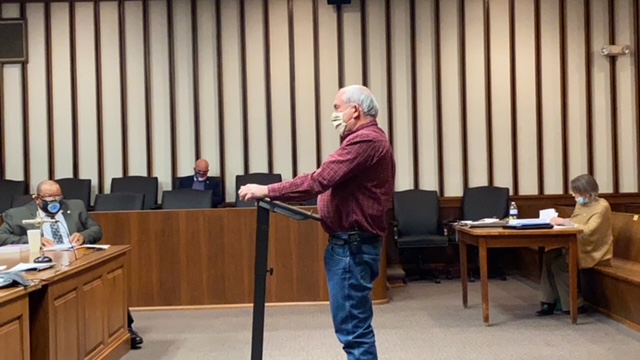 Chief Brennan explained the risks and struggles firefighters have to protect citizens’ property. He added it is a disgrace to have a divided county around honoring the fallen Firefighter’s sacrifice.

Next, Lt. Allen’s mother walked up to the podium to speak with his father, daughter, colleagues, and friends in the audience behind her. She said, “14 years ago, I got this phone call that our son had been killed instantly, as he was working for the Tar Heel Fire Department doing as we already discussed. He was trying to lower the tax rate and the insurance rates, checking the fire hydrants in the area.”

As she began to speak, there was chatter on the video chat as Commissioner Bullock’s daughter walked in the room with the video and began to talk to him about something. Before Commissioner Bullock turned off his video access, he was chuckling with his daughter, not listening to Ms. Allen’s comments. Then Commissioner’s Munn-Goins video ended as well, but chatter from the telephone continued.

Although noise and distractions persisted from the commissioners on the telephone, Mrs. Allen was not deterred from explaining her point of view.

She recounted the process of trying to have her son honored by the North Carolina Department of Transportation (NCDOT). “This has been going on for two years,” Mrs. Allen said, “It’s a long process. You have to get letters; you have to get documentation, there’s money involved, there’s a lot of things that go on to get anything named in this county.”

Tuesday evening was not the first time Mrs. Allen and the Allen family had dealt with the county’s elected officials. It was approved unanimously by all the commissioners to have Lt. Allen’s name put on the road through Tar Heel, but the NCDOT said it had to be a bridge, not a road.

Therefore, months ago, Mrs. Allen went back and asked the commissioners to approve a resolution requesting the NCDOT to name the bridge on the same road in honor of her son. 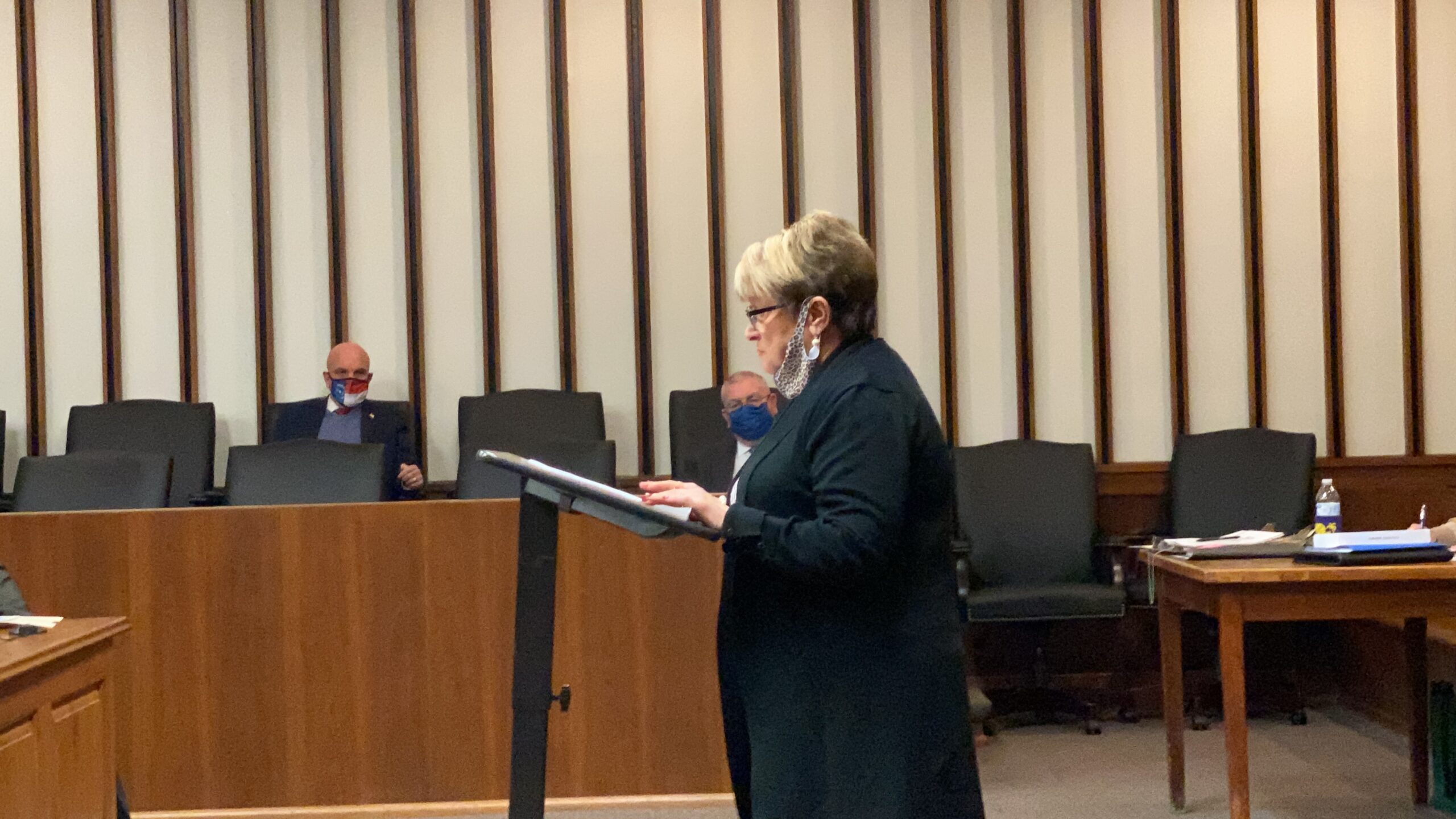 She testified to the conversation between her and Commissioners Bullock and Cogdell, “They told me, ‘He deserves this; he gave his life for this county, but we can’t do it because we’re upset with so and so… and it’s a political issue… and unfortunately, because of that, you’re paying the price.'”

Mrs. Allen asked the two commissioners what could be done to rectify the situation. She said the commissioners told her to lay low until after the election, and then they would get the public hearing back on the agenda.

Fast forward to Tuesday evening’s meeting. The same two commissioners added one more Commissioner, Dr. Munn-Goins, to their motive. Commissioner Bullock admitted to Mrs. Allen and other commissioners on the board that now they are upset because Commissioner Bullock did not get elected to serve as Vice-Chair of the Board. Therefore, they would not be voting for the resolution to name the bridge after Lt. Allen, “because this is one vote we can control.”

Mrs. Allen was perplexed about how her son being killed serving his county is a political matter, and he, along with his family, is being punished.

Lt. Allen’s daughter shook her head in agreement as her grandmother, Mrs. Allen continued. View Mrs. Allen’s address to the board of commissioner below on our YouTube channel.

According to Mrs. Allen, before the meeting, she spoke with the three commissioners who were not in person. Commissioner Munn-Goins told Mrs. Allen she knew naming the bridge was right, but she could not support the proclamation at this time due to the other two commissioners not supporting it.

Before closing, Mrs. Allen said, “It’s not about you! It’s about the people of Bladen County and the fallen Firefighters and the First Responders of this county that actually keep this county going… And later on, when all this is over with,” Mrs. Allen asked, “How are people going to look at this?”

She explained naming the bridge after her son is an opportunity for the Commissioners to show how they can work together. She added, “I know this is going to go back on the agenda, and before it does, I want some praying to be done! I want to see some unity in Bladen County! I’m sick to death of seeing division because of political reasons!”

Before the meeting was over, every Commissioner present addressed Mrs. Allen personally and told her they were in support of the proclamation to honor her son.

Commissioner Munn-Goins tried to speak up on the phone about agreeing to disagree, but her statement was unclear due to the phone connection.

Commissioner Cogdell spoke up on the phone as well about his reason for not attending the meeting in person stating he would not risk his life to participate in a commissioner’s meeting.

At this time, the commissioners’ board has not decided to put the item back on the agenda. More information will be published as soon as it is made available.

Update: Commissioner Mr. Cogdell contacted BladenOnline and stated the accounts are not accurate. According to Mr. Cogdell, the proclamation on racism has nothing to do with the feelings regarding the bridge’s naming. He explained the commissioners’ unanimously approved the road in Lt. Allen’s honor, but some of his constituents did not want the bridge named because it was in a different district.

He said, “Every jurisdiction has their own guidelines. I know what the statute says, and I will live by the statute.”

View the entire meeting recorded by the County of Bladen in the video linked below.