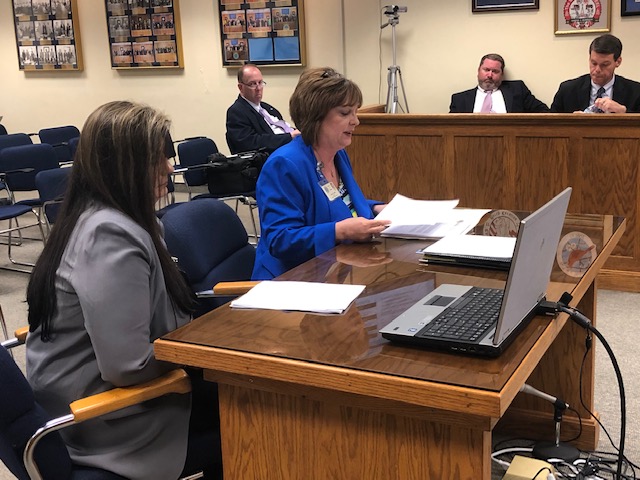 The Bladen County Board of Commissioners met on Monday night and received the 2017-18 audit report where they learned there were some issues found in relation to Medicaid.

“We tested 90 Medicaid files and did find some issues,” said Bryon Scott with the Thompson Price, Scott, Adams and Company in Elizabethtown.

He also stressed that the issues found were not creating a liability. Scott noted the Medicaid program is a “complicated program.” He added the NC State Auditor is reviewing the state’s Medicaid program.

Vickie Smith, Director of the Bladen County Department of Social Services was joined by Lisa Nance, with Bladen County DSS, and addressed the commissioners regarding corrective actions that have been put in place to try to rectify the issues found. Smith said the program improvement plan was implemented in March 2018.

“We did develop a program improvement action plan that we have put in place at the department to overcome the deficiencies,” said Smith.

Smith said a program improvement plan was implemented and procedures put in place including a Medicaid application checklist for employees to use when they are completing applications in the State’s NC FAST system. She said the main focus will be on new hires at the agency. Smith said all of the applications and recertification requests completed by employees with less than one year’s experience on the job will be reviewed before they are entered into the NC FAST system.

“Once it (the application) goes into the NC FAST system and it is approved there is not much we can do about that case,” said Smith.

Smith said because the new hires are learning the process, their staff will be able to catch and correct any errors before a case is entered into the system for processing. Smith said the Medicaid Unit Supervisor is currently reviewing the Medicaid applications and recertification requests before they are submitted along with performing her other duties in the agency.

“We are continuing to do that with each recertification and each application to verify that the work is completed,” said Smith.

Smith said a checklist was created several years ago for the employees with more than year of service to utilize. Smith said each employee is supposed to go through the checklist and ensure each item has been completed before entering the application into the NC FAST system.

“It is the caseworkers’ responsibility for completing the checklist and placing it in the supervisor’s box and then the supervisor checks it,” said Smith.

Smith said the department has also put into place a random review process, which consists of pulling six cases at random to be reviewed. If inaccuracies are found, it is returned to the caseworker to be corrected.

“We feel that with this we are going to make an improvement with our next audit we have,” said Smith.

Bladen Commissioner Chairman Charles Ray Peterson said, “You got a checklist how can we have employees that can’t follow a checklist.”

“I will say people can check off a checklist that they’ve completed it and actually the work hasn’t been completed,” said Smith.

Commissioner Michael Cogdell asked how many employees were in this department and Smith said there are nine employees and a supervisor and lead caseworker. She has requested an auditor’s position in the upcoming budget to help with reviewing the cases and correcting the errors.

Commissioner Arthur Bullock asked Smith when the program improvement plan was put into place, Smith said the plan was put in place on March 22, 2018. She said that with the most recent audit some things have improved but other deficiencies were found.

Commissioner Ray Britt asked about whether or not a NC Fast representative was in the area that can assist. Smith replied that she was unaware of one. Britt stated a representative claiming to work with NC FAST had recently been in his store and is still in the area.

Commissioner Cogdell asked how many cases the Medicaid department addresses each year. Smith said 3,600 cases per year or about 40 to 50 cases per caseworker.

Commissioner Peterson said, “People need to be following the checklist.”