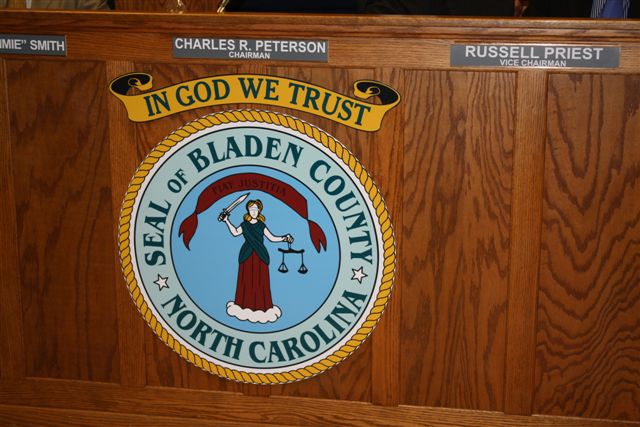 By bladenonline on 06/23/2015
By: Robert G. Hester
Bladen County Commissioners met in special session Monday evening and approved the budget for fiscal year 2015-2016 and set a tax rate of 82 cents to cover the total cost.  The current rate is 74 cents and has remained the same for several years.
At the Monday meeting,  the board approved a contract with JOSS Transportation to provide transportation for all Medicaid related travel.  The bid was for $1.90 per mile.  J0SS is one of two providers in the current year.  Questions were asked by Commissioners Arthur Bullock and Michael Cogdell related to the timing of the final agreement, one question related to Joss Transportation reportedly reducing the insurance coverage on their current contract.  Commissioners were told the rate of $1.90 was agreed to during the bid process and the company had raised their coverage to $1.5 million.  JOSS was approved as the provider by a 6-3 vote with commissioners Cogdell, Bullock and Dr. Delilah Blanks voting no.
Cris Harrelson,, Bladen County Human Services Director,  asked the board to revise upward the amount of a grant by $1,305 for a Medicaid Program Grant Application, bringing the total grant to $35,305.  His request was approved.
Chairman Charles Ray Peterson then reviewed the budget request for the coming fiscal year.
Dr. Blanks said she needed a question answered related to the salary of the Tax Administrator.  Chairman Peterson said that was a personnel issue and called for an executive session.  The vote was approved.  The board went into executive session for several minutes.  No action related to the matter was discussed after they returned to open session.
Peterson noted a revenue neutral rate following revaluation was .7489
Payment on a new mandated jail adds another .0479 to the tax rate.
EMS upgrades amount to .0175,
Economic Development added another .0057, bringing the total to 82 cents.
Peterson called for a vote and the budget was approved on a 6-3 vote with Billy Ray Pait, Daniel Dowless and Jimmy Smith voting no.
County Manager Greg Martin updated the board on legislative action related to an increase in sales tax.  The NC Senate appears to favor the changes, the NC House and Governor McCrory have expressed concerns.  According to Martin, it appears to face an uphill battle.
Commissioners approved a timber bid from Gooden Land and Timber Company for $3600 for the trees on the new jail site.  Tri State Land and Timber bid $3100..
After the budget was approved and all items on the agenda considered, Chairman Peterson read from a prepared text:
“The development of the FY 2016 Bladen County Budget has been a challenging process.  There have been a number of important factors given consideration in developing a balanced budget.  Two key factors have been the uncertainty of the impact of revaluation as well as the financial impact of the debt service and operating costs associated with a new detention and law enforcement center.
Other budgetary factors included the need for additional revenue to fund capital and operating costs for Emergency Medical Services, and the need to identify funds to assist economic development efforts in constructing an industrial shell building, needed as a critical tool to recruit industry to Bladen County.  There are currently no available industrial buildings in the county.
During the budget process, school system officials requested additional funding to complete the current fiscal year.  Commissioners funded this request in a professional manner and agreed to maintain next year’s appropriation for the school system at the existing current year level.  With a continuing decline in students and State revenue, both the Board of Education and Bladen County Board of Commissioners recognize the need to develop a long-term, sustainable plan for Bladen County Schools that is in the best interest of our children and the community as a whole.
Each member of the Board of Commissioners cares very deeply about Bladen County.  Individually and collectively, we have a strong desire to fund critical services such as education, public safety and human services, while maintaining a reasonable tax burden for our citizens.
By adopting the budget tonight, the Board has had to, unfortunately, make the difficult decisions to substantially increase the property tax rate for the upcoming year.  This decision was not made without a great deal of consideration.
Hopefully, the NC General Assembly will approve proposed Sales Tax legislation to shift the distribution to assist rural counties.  This would provide much needed economic assistance to Bladen County and our seven municipalities.
Regardless of the proposed legislation, I hope this Board will consider authorizing a referendum to allow voters the opportunity to approve the Article 46 1/4 cent sales tax, with the revenue to be earmarked for the specific purpose of relieving the property tax burden for our citizens.”
The board then voted to adjourn.
Share: