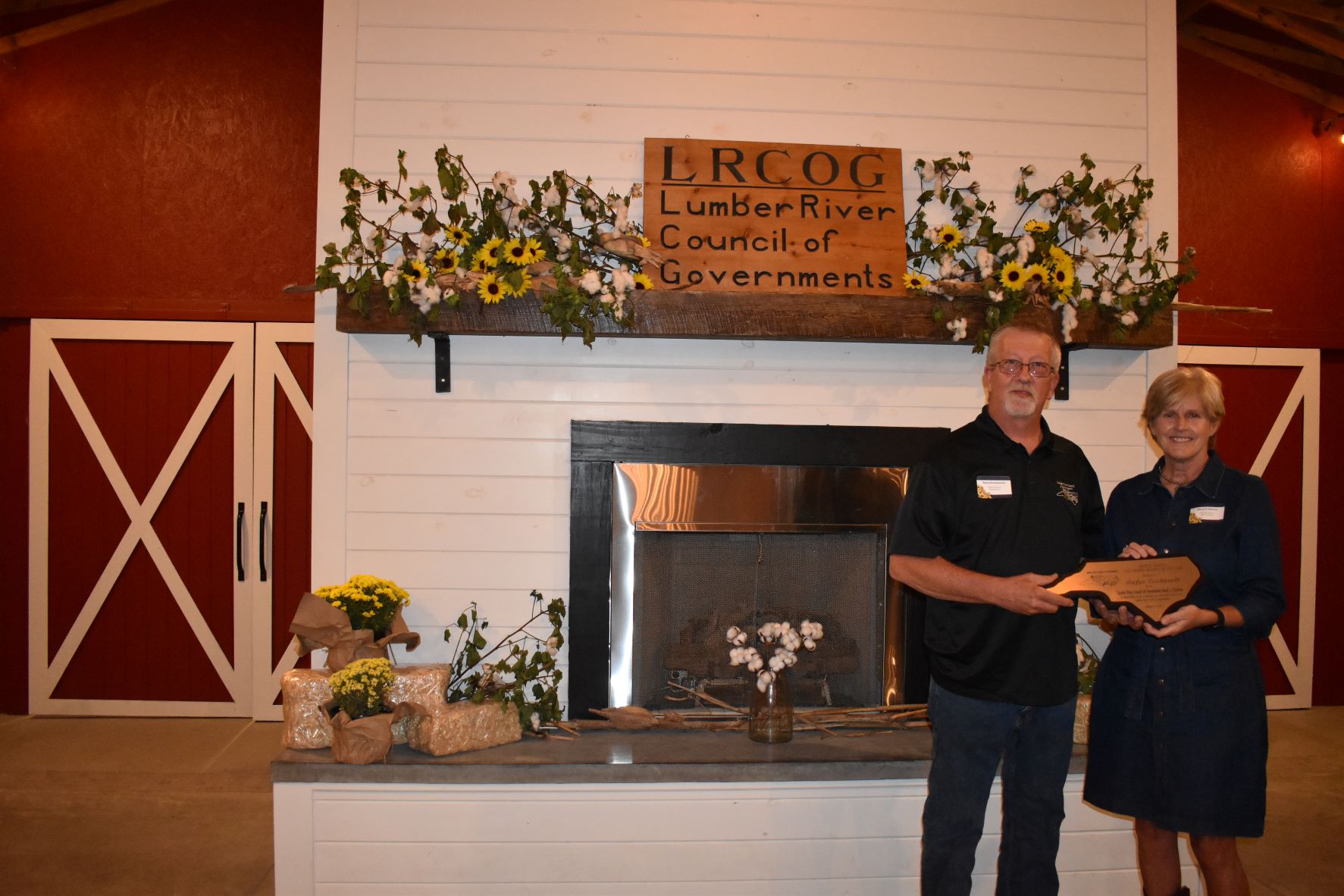 On October 21, 2021, the Lumber River Council of Governments (LRCOG) celebrated 49 years of excellence and recognized individuals who have generously given their time and energy towards the work of the LRCOG. Rufus Duckworth, LRCOG Board of Directors Chairman, presided over the event.

Additionally, each board and advisory council serving the LRCOG presented an award to their outstanding members. Those honored were Faline Dial, Chairman of the Robeson County Board of Commissioners, as the Rural Planning Organization Transportation Advisory Committee Member of the Year; Terry Mercer, of Richmond County, as the Aging Advisory Council Member of the Year; and Ophelia Ray, of Hoke County, who received the Dr. Stanley Richardson Award for Workforce Development Board Member of the Year.

Three divisions of the LRCOG were recognized:

Mr. Duckworth is also an ardent supporter of his Town of Bladenboro, previously serving on its planning board for 19 years, and currently serving on the Boost the Boro committee, helping to organize their annual Beast Fest and Spring Fling events.

In addition to his work on behalf of the LRCOG and the Town of Bladenboro, Mr. Duckworth is  currently the manager for Bladenboro Hardware Company and a licensed electrician. He previously retired from being a supervisor from Alamac. Mr. Duckworth is a member of Bethel  Holiness Church in Bladenboro.

Annie Kohnen Regional Clerk of the Year Award
Since 1999, this award has honored those clerks who demonstrate the true spirit of public service exemplified by “Miss Annie”; named in honor of Annie Kohnen, longtime Scotland County Clerk,  this award is given in recognition of the relentless work performed by clerks in each of our  municipalities and counties.

Maggie has truly embraced her encore career as Hoffman’s Town Clerk, helping the town to grow and to improve its local governance and organization. Since her appointment as town clerk in 2014,  Maggie has helped lead the town’s efforts in updating their zoning ordinance and personnel  manual, increasing their tax collection rate, and properly archiving the town’s records. Maggie has also been instrumental in helping the town start the process of providing sewer service to their residents.

This award, named in honor of Mr. John K. McNeill, Jr. is presented annually to a manager within  Region N demonstrating outstanding leadership qualities. Mr. McNeill was serving as Mayor of  the City of Raeford and also as a LRCOG Board member at the time of his death in 1990. The recipient of this award is decided by a vote of the Region N Manager’s Association.

This year’s manager of the year has amassed more than 50 years of dedication, commitment, and service to the region. He started his career in public service in 1966, serving as an engineer assistant  for the City of Lumberton. Since that time, he served the Town of Red Springs as its manager for more than 32 years before moving to his current position as the manager for the City of Lumberton in 2005. This year’s manager of the year is Wayne Horne.

Over the course of his career, Wayne has worked tirelessly to improve the economic condition of  the local governments that he has served by helping them to grow, innovate, and prosper. Wayne  has demonstrated his ability as a successful leader in the midst of Mother Nature’s most  devastating impacts. He successfully led the Town of Red Springs in recovery from the 1984  tornados, then later led the City of Lumberton in its recovery from both hurricanes Matthew and  Florence.

In addition to his work as the City of Lumberton Manager, Wayne has served as a mentor for new managers within our region. He has faithfully given back to the larger community through his service on various local boards including the Rotary Foundation of Rotary International,  International City Managers Association, North Carolina City & County Managers Association,  local chambers of commerce, and his church.
Wayne holds a Master’s in Administrative Services from East Carolina, a Bachelor’s in Business  Administration from Pembroke State University, and an Associates’ in Civil and Sanitary  Engineering Technology from Fayetteville Technical Institute. Wayne has also completed the  UNC School of Government’s Municipal Administration Course.

Leon Maynor Local Leadership Award
This award is named in honor of former long-term Lumber River Council of Governments Board member and Lumberton City Councilman, Leon Maynor, who passed away during his service on the LRCOG Board of Directors. Mr. Maynor was a fierce advocate for his community of West  Lumberton, and strived to improve the lives of his constituents on a daily basis. This award is given in recognition of the efforts of one of our elected officials, who, like Mr. Maynor, has provided extraordinary leadership within their local community in order to improve and protect the quality of life in their community.

This year’s local leader of the year has served his county as a Commissioner since 2014. His constituents say he epitomizes leadership and possesses the qualities that are required to maneuver in these challenging times. The 2021 winner of the Leon Maynor Local Leader of the Year award is Hoke County Commissioner, Harry Southerland.

During his tenure on the Hoke County Board of Commissioners, Mr. Southerland has successfully guided the county in constructing two community buildings and an agricultural building for Hoke  County residents. He has also helped facilitate ongoing construction of an aquatic center for the county.

Commissioner Southerland is described as an effective communicator who always helps to resolve issues with respect and confidence. He is self-motivated, proactive, and people-orientated. Over the course of the pandemic, Commissioner Southerland has worked to ensure that his county and its residents have had access to not only essential items such as personal protective equipment, but also access to small business loans and capital to keep the Hoke County economy moving forward.
Commissioner Southerland holds a Juris Doctor from North Carolina Central University and a  Bachelors in Business Administration and Management from North Carolina State University.

L.E. McLaughlin, Jr. and Bob Gentry Regional Leadership Award
In September 2004, this prestigious award was renamed to honor the leadership of two dedicated former members of the LRCOG Board of Directors, Mr. L.E. McLaughlin, Jr. and Mr. Bob Gentry.  While both members served with honor, they also served as friends, putting aside the often strained relationships between jurisdictions. Both men, while dedicated to their respective local  governments, realized that successful endeavors often cross geographic boundaries. Their friendship became indicative of relationships made and strengthened at the LRCOG table and still  serves as a wonderful example of regional leadership.

This year’s Regional Leadership Award recognizes an individual who has been a strong supporter of regionalism and an advocate for the Lumber River Council of Governments (LRCOG) for many years. He truly believes in the work of the LRCOG and the value of its regional solutions that have provided long-term health and economic prosperity for his local community. He is not only an advocate for the LRCOG, but for other organizations working on the regional level as well. He strives to ensure that the greater good is achieved and that the rural voice is always heard in the halls of Jones Street. This year’s winner is Mayor Charles Townsend of Fairmont.

Mr. Townsend started his service on the Lumber River Council of Governments’ Board of  Directors in 2007, and has tirelessly advocated for the work and programs of the LRCOG  throughout his tenure. Mr. Townsend has also served the LRCOG as a delegate to the North Carolina  Association of Regional Councils’ (NCARCOG) Forum. In this role, Mr. Townsend passionately advocated for the work of the LRCOG each year during the NCARCOGs Legislative Advocacy  Day, imploring members of the NC General Assembly to better utilize and support the work of the  LRCOG and the other councils of government across North Carolina. In addition, Mr. Townsend has successfully kept the LRCOG Board of Directors informed of the work that the NCARCOG  is taking to support the LRCOG and our region at the state level.

In addition to his service to the LRCOG, and as the Mayor of Fairmont, Mr. Townsend also gives countless hours each year to support the work of other organizations working to improve the health and welfare of the citizens of the Lumber River region. He serves as a member of the Robeson  Health Care Corporation Board of Directors and Helping Hands Ministry, he is a Guardian Ad  Litem volunteer, and an active member of his church.

The Rural Planning Organization Transportation Advisory Committee Member of the Year award is presented each year to an outstanding TAC committee member.

In addition to serving on the TAC, Mrs. Dial serves her community in numerous other ways. She was elected to the Robeson County Board of Commissioners in 2018, and is presently serving as its chair. She is past president of the Pembroke Area Chamber of Commerce, a former member of  the UNCP Foundation Board and UNC Board of Visitors and is a member of the Kiwanis of  Pembroke. She received the Coleman Spirit of Unity Award for leadership in the business community in 2017.

Mrs. Dial has been the President of Speech in Progress, Inc. since 2004. She is married to Patrick  Dial and they have two daughters, Madison and Laney. She attends Prospect United Methodist  Church.

The Regional Aging Advisory Council Member of the Year award is presented each year to an outstanding RAAC member.

Terry Mercer served as Chair of the Regional Aging Advisory Council from August 2019 to  August 2021. She provided strong leadership skills during the initial COVID pandemic to the Area  Agency on Aging and the Regional Aging Advisory Council. She guided the transition of the historically in-person quarterly meetings to a virtual platform while still keeping members engaged in service delivery and advocacy opportunities. She supported the development of the new four year (2021-2024) Regional Aging Services Plan entitled “Building Stronger Communities through  Opportunities in Aging”.

She is very active within her community serving on numerous boards and civic groups to include  Senior Games of Richmond County, Hamlet Senior Center Advisory Board, and Administrative  Council at Hamlet First United Methodist Church and Worship Committee at Hamlet First United  Methodist Church. In her free time, she enjoys reading, painting, basket weaving, pottery and a  variety of water sports.

Ms. Mercer is a lifelong resident of Richmond County. She has an Associates of Science from  Sandhills Community College and a Bachelor of Science in Mathematics Education from the  University of North Carolina at Pembroke. She retired as an educator from Richmond County  Schools.

Terry has been married for over forty years to Steve Mercer. They have two children and two grandchildren.
Congratulations, Terry! Thank you for your service to our region’s older adults.

Dr. Stanley Richardson Workforce Development Board Member of the Year

The winner of the Lumber River Workforce Development Board Member of the Year is Ms. Ophelia Ray.

Ms. Ray has a strong commitment to serving her community, especially in the education and empowerment of youth and families. Ms. Ray previously worked with the City of New York,  before retiring to found her own nonprofit, Maggie’s Outreach Community Economic  Development Center, to enhance professional development opportunities for young adults and  families. Ms. Ray also chairs the Youth Evaluation Committee.

In addition to the Lumber River Workforce Development Board and Maggie’s Outreach  Community Economic Development Center, Ms. Ray’s is also very involved with her church and  community and enjoys spending time with her family. She is a mother of three, a grandmother and  great-grandmother.

The LRCOG provides an array of programs and services to the member governments located within its region: Bladen, Hoke, Richmond, Robeson, and Scotland counties. It serves as an administrative and service delivery arm for federal, state, regional, and local programs of its member governments.