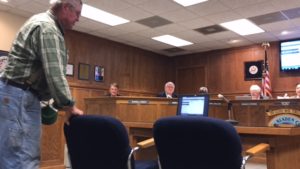 The agenda for the March 19th Bladen County Commissioners meeting was light. Two citizens did address the commissioners with concerns about different types of water issues.

Dawson Singletary a Bladenboro citizen and candidate for a County Commissioner seat in the upcoming election was the first individual listed to address the commissioners.

“I’m here on behalf of the people that live around the Bryant Swamp basin concerning the use of the grant funds that were obtained by county staff to help some runs,” he said as he introduced himself to the commissioners.

Before hurricane Fran, Floyd and Matthew the runs were open, but around Berry Lewis Road there is a very big beaver dam causing flooding according to Singletary. He listed his concerns about the dams, the funding for the issue and more with the commissioners. To listen to Singletary’s address to the board members, view the video linked below. 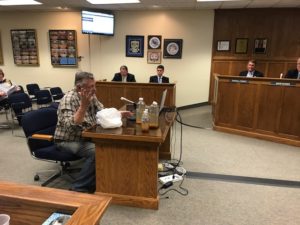 Next citizen up for discussions with the commissioners was Lawrence B. Pfohlman also a citizen from Bladenboro. Pfohlman brought bottles of cloudy, muddy water to demonstrate his concerns of water quality. He explained how he had issues for years with his county water.

The Bladen County Water Department has been made aware of Pfohlman’s concerns. He said the local department told him the water does become discolored when they have to flush out the water lines. Chemicals in the water also concern Pfohlman.

Greg Martin, County Manager explained the water department was aware of the issues when flushing out water lines. Chairman of the Board of Commissioners Ray Britt asked Martin to check into the water quality issues Pfohlman made public.

Lou Nelson with the Bladen County Schools filled in for Sharon Penny, Finance Officer for the schools, to cover the items on the Commissioners agenda concerning outlay projects and lottery funds. The Commissioners approved the Capital Outlay Projects for the Fiscal Year of 2017-2018 in the amount of $179,694.83.

The applications for the NC Education Lottery Public School Building Capital Fund for the Benefit of Bladenboro Primary School in the amounts of $16,877 and $23,235 were approved along with the application for Bladenboro Primary in the amount of $56,663.  Commissioner Dr. Ophelia Munns-Goins did ask some questions about where funding was being spent before the Schools agenda items were approved unanimously. 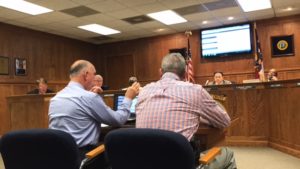 Sheriff Jim McVicker and Captain Jeff Singletary appeared before the Board of Commissioners to ask them to approve a Roadside Litter Cleanup Pilot Program and adopting a policy empowering the Sheriff’s Office to provide inmates for a county-wide roadside litter clean-up program. Before the Sheriff started explaining his proposal, Chairman of the Board of Commissioners Britt commended Sheriff McVicker for taking the initiative to make the proposal. Britt said he receives several calls each day about the litter issues in the county.

The new program will allow the Sheriff’s Office to use inmates to help clean the litter off the roadsides. The program was approved and the policy adopted in reference to the new litter clean up programs.

After the litter clean up programs were addressed the board discussed the county’s advisory committees. Eddie Sutton was appointed to the White Lake Planning and Zoning Board. Re-appointments were made for the Elizabethtown Planning and Zoning Commission and Board of Adjustments and the Juvenile Crime Prevention Council.

In April the board will appoint advisory board members to the Elizabethtown Fire District Committee, Health and Human Services Agency Advisory Council and Keep Bladen Beautiful board. Any citizen interested in serving on an advisory committee should contact a Bladen County Commissioner or the Bladen County Manager’s office.

Other items covered and approved by the commissioners: